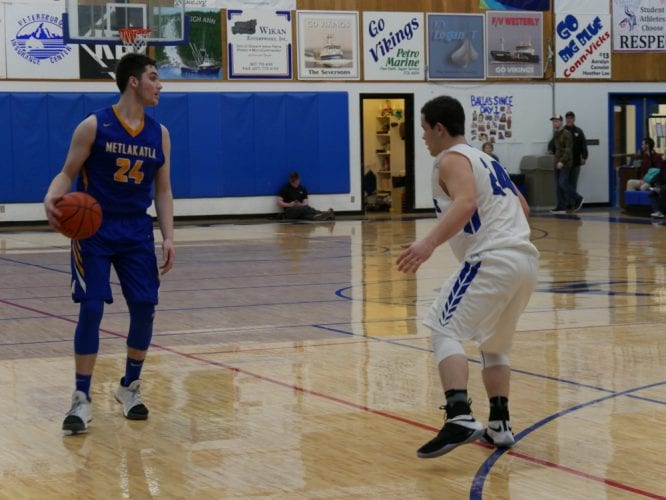 Petersburg High School’s varsity basketball teams both lost a pair of games at home to open the season against Metlakatla. For the boys, it was a re-match of the state championship game last March but the defending state champion Vikings lost to the Chiefs this time around.

The Vikings and Chiefs split their season series last year and battled for the region titled and state title. The opening games of the new season in Petersburg this month were close. The Chiefs won Friday night 62-57 and 76-67 on Saturday. Petersburg coach Rick Brock said he has a young team this year.

“Mark Neidiffer is our only returning starter,” Brock said. “Dale Strong and Louden Sandhofer played pretty good minutes last year for us at the varsity level. And then from there it’s brand new faces. So you know going in first series of the year playing a top-notch squad I was happy with some of the things we did. Obviously at the beginning of the year you have a lot of things that we can improve on. Probably the best thing we did all week is we competed. They’re very physical and athletic and run, shoot but we competed. You know each game came down to really three or four possessions that we didn’t do things right defensively, got into a bad rhythm on the offensive end. That really was the difference in both games.”

Brock thinks the Chiefs are probably one of the top 2A teams in the state again this year. But he expects tough competition from throughout the region and explains his team is still learning.

“We talked before this series that this was going to be a measuring stick for us to see how high the bar is for them and really for us of where we can grow to,” Brock said. “And then our goal is to really improve every weekend, get better and better and better. Our league is going to be tougher from top to bottom than it was last year. Haines has improved, lotta kids back. They got a really good freshman point guard. Craig and Wrangell return a lot of key players. So our work is cut out for us but that’s the way it is every year in Southeast. We’re gonna concentrate on ourselves right now, try to get better and learn how to play together, figure out our rotation and who can play in what spots and hopefully just get on a nice steady uphill climb and go from there.”

Brock thinks senior Mark Neidiffer had a solid weekend against Metlakatla on both ends of the court and hopes his leadership trickles down to his younger teammates. 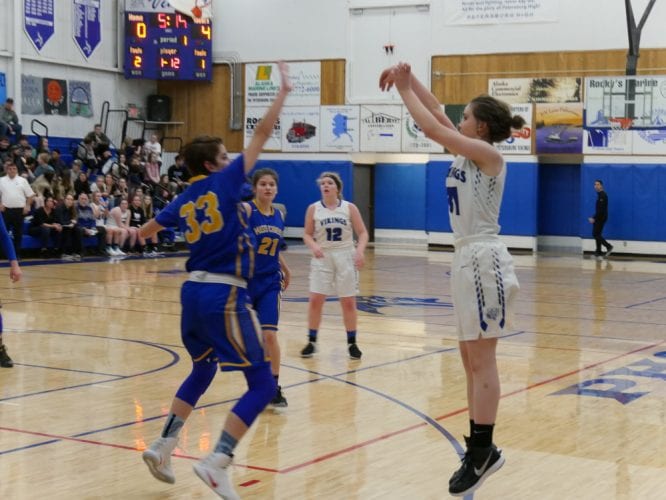 Meanwhile, the Petersburg girls lost their season openers to the MissChiefs Friday 45-25 and Saturday 44-34. Rikki Lewis was top scorer for Petersburg on Friday with 10 points and she had 8 on Saturday. Katie Brock led Petersburg’s scoring in that game with 12 points. Coach Dino Brock thinks the games were typical of the first series of the season.

“Met(lakatla) is easily one of the top teams in the state if not the region,” Brock said. “And so, I thought that we did a nice job battling with them. Friday it took us a while to get into a flow but then through the second and third quarter we played them, actually out-scored them by one point and so it kind gave us a little bit of confidence. And Saturday we started out slow a little bit again and then really I thought we played really well especially the second half. So the key for us is going to be to figure out how to put that full game into it, but I thought we played very well against a really good team.”

The Lady Vikings did not make the state tournament last year and lost three starters to graduation. Brock said players are stepping up to take on some new roles. “Whether it’s as starters, people coming off the bench, our leading scorers, all of that stuff we’ve lost a lot in the last couple years and so it’s been really fun to see different people step up and assume all these different roles for us. We’re not the biggest team in the world as you saw this weekend. So we have to do some things differently. We’re gonna spend tons of time working on blocking out and rebounding as a group, not just relying on two or three people but all five people going after rebounds.”

Both the girls and boys teams have no tournament play over the holiday break this year for the first time in years. Instead the teams will be traveling to Unalaska the second weekend in January. But next up is homecoming in Petersburg, the first weekend in January against the Wrangell Wolves. And because of reduced ferry service this winter, the schedule has both teams home or both teams away instead of one or the other.