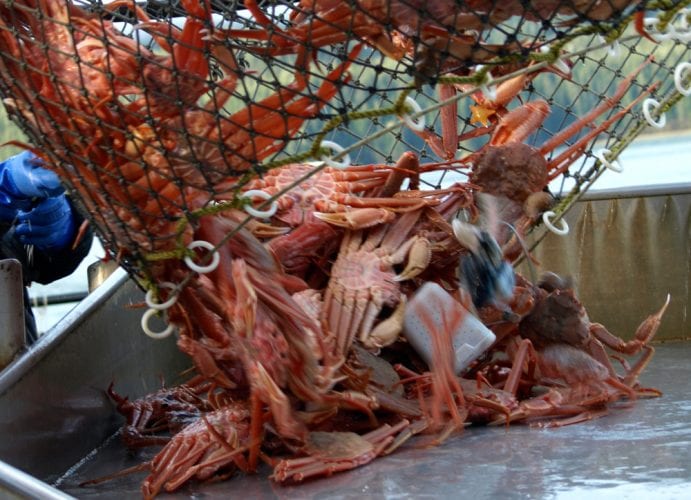 Commercial crabbers in Southeast Alaska will have some opportunity to fish in offshore waters for king and Tanner crab fishing following decisions by Alaska’s Board of Fisheries in January. The board didn’t go for other changes to those fisheries proposed by crabbers though.

A couple proposals sought to expand the boundaries of king and Tanner crab fishing areas into federal waters beyond three miles offshore. The Southeast Alaska Fishermen’s Alliance’s Kathy Hansen said other crab fisheries were not limited to three miles from shore.

“This would just bring us consistent with the rest of the state and possibly give somebody an opportunity to try something a little different,” Hansen said.

With no federal management plan in place for crab stocks in those waters, the state can manage fisheries there instead. The board approved that change with no one opposing it, opening the door for several other proposals.

Some were proposals to change Southeast’s red king crab fishery. That opened in 2017 for the first time in six years. The commercial fishery is only opened when Fish and Game determines there’s a guideline harvest level (GHL) of at least 200,000 pounds. This proposal and others sought some fishing opportunity when that minimum GHL is not reached.

Crabbers wanted to create an exploratory fishery in southern Southeast waters, along with offshore waters in years of low abundance. Yancey Nilsen of Petersburg was one of the four who signed on to that proposal. “And we’re just looking to kinda do what was done before with an experimental fishery,” Nilsen said. “And I know there was some problems with it before but we’d just like a chance again.”

The board amended the proposal to allow for commissioner’s permits for king crab in waters from three miles to 200 miles offshore but did not include the near shore waters of the southern panhandle. The Alaska Department of Fish and Game could issue such a permit but could require set seasons, pot limits, onboard observers and catch reporting.

Board member Alan Cain of Anchorage said he’d support the potential new fishing opportunity. “However I just wanna state I do get nervous when other fisheries are closed, the regular commercial fishery is closed, to send folks off into areas with very little other vessel traffic in it,” Cain said. “There is a potential for abuse which makes me nervous but hearing what I’ve heard I’m gonna support this.”

The board was unanimous in supporting the commissioner’s permit for offshore king crab.

Another proposal sought an equal share fishery for red king crab when the GHL is between 50,000 and 200,000 pounds. That would mean dividing the target harvest evenly between all the permit holders. The Petersburg Vessel Owners Association sought that change. Executive director Megan O’Neil explained.

“The price of king crab keeps rising and we get red king crab seasons about once every six years right now,” O’Neil said. “We’re looking to be able to capitalize on lower years of abundance. This season I think the lowest price was $10.50 a pound. They’re just a very valuable crab.”

Fish and Game staff opposed the change and said it would likely result in over-fishing of king crab stocks. Board member Robert Ruffner of Soldotna agreed. “I clearly understand the desire to provide some opportunity and have some crab on the market but I just don’t see chasing down lower GHLs given our track record with shellfish,” Ruffner said. “So I’m not going to be in support of this.”

The vote was 6-0 against that equal share fishery for red king crab, with board chair John Jensen sitting out that vote.

Likewise, the board also unanimously voted down a proposal to change the Tanner crab fishery to an equal share fishery. However, the board did make a change to allow exploratory fishing for two weeks in the offshore waters for Tanner crab. That would happen after the opening in both the most popular core areas and less-fished non-core areas. Fleet members and seafood processors sought additional Tanner fishing opportunity in some parts of the inshore waters of Southeast but that did not pass as part of the proposal.