Petersburg High School actors take to the stage in melodrama 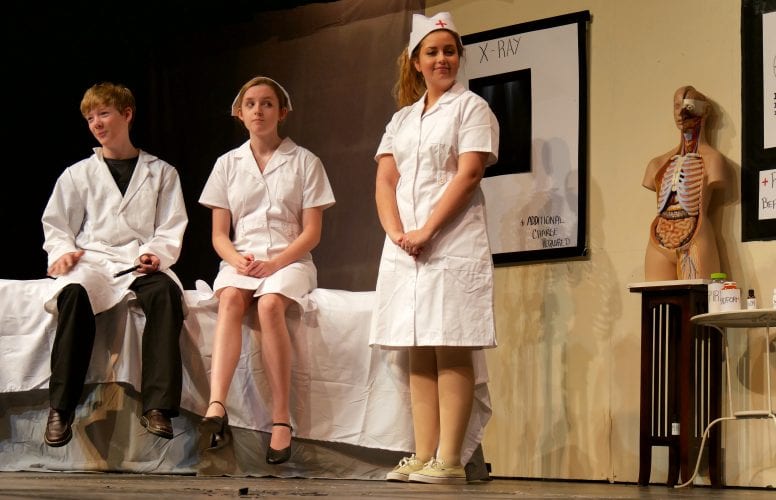 Petersburg High School actors will be performing the melodrama, “The Dastardly Doctor Devereaux” Jan. 31 and Feb. 1 in the Wright Auditorium. KFSK’s Angela Denning has more:


“The Dastardly Doctor Devereaux” is set in a hospital and most of the actors play the roles of hospital staff. There are several nurses and doctors and a few of them are up to no good.

The play, which is geared for all ages, is being codirected by Cindy Fry and Rowan Beraza. They’ve been working on the project for months. They started gathering up interested students back in October. By November they were assigning characters and passing out scripts. The students have been practicing since then with dress rehearsals this week.

Both Beraza and Fry have been involved with Petersburg’s community theater, Mitkof Mummers. Beraza teaches Spanish at the high school.

“It’s fun to see especially students that I have in class that are generally pretty shy, it’s fun to bring them out of their shell and have them really get comfortable projecting their voice, getting those presentational speaking skills and getting more confidence,” Beraza said. “It’s pretty exciting to see that and then sometimes I also see that translate into the classroom as well.”

Fry says they have a really diverse group of students in the play this year. 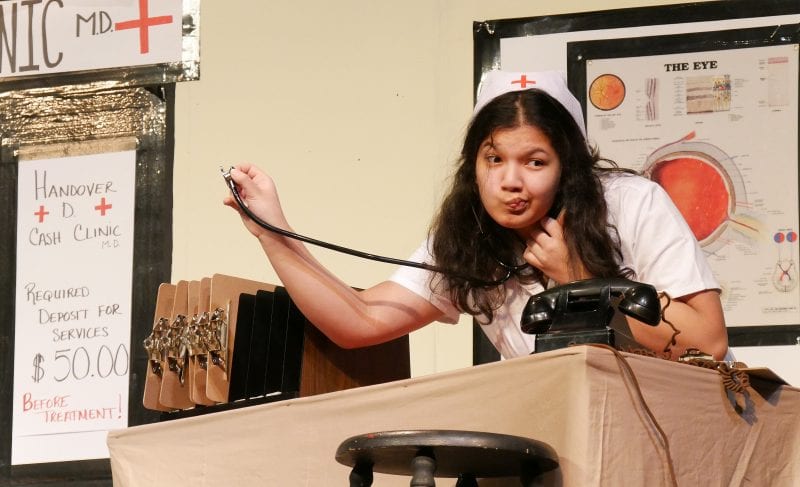 “So that’s also fun to see those different groups come together or those personalities come together on stage. So that’s great to see all these people really pull it off,” Fry said. “They’ve been working very hard.”

There are two seniors in the play, Gus Pennington and Alice Neidiffer. They both have performed on stage every year of their high school career and Fry says both are talented.

“Gus has a tremendous amount of lines that he’s had to memorize this year, I think it’s like 189 lines, which is a large number for anybody in a high school play,” Fry said. “And Alice, she’s able to just carry her lines so well.”

Neidiffer says she likes being on stage whether it’s for plays, dance recitals or performing music.

“I really like the attention, not going to lie,” Neidiffer said, laughing. “I love being on stage so much. I love seeing the crowd and to feed off of their energy, it’s a great experience.” 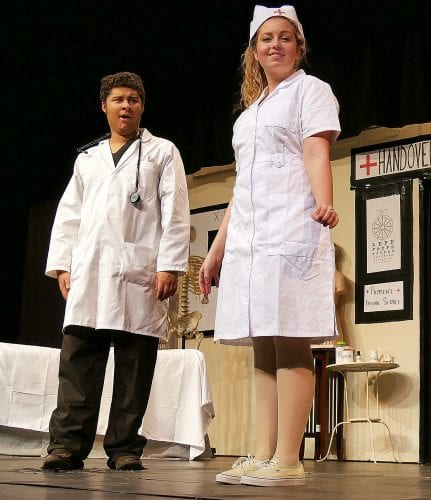 Seniors Gus Pennington and Alice Neidiffer have acted since they were freshmen. (Photo by Angela Denning/KFSK)

“Most of it’s memorizing and then it’s just putting your stage face forward,” Pennington said. “If you’re character is supposed to act a certain way you have to fit that.”

“My advice would be to totally just go for it,” Neidiffer said. “The great thing that I’ve found about theater, especially acting, is you don’t have to be the person you are every day. You get assigned a character and you get to be that character. If you’re the shy kid you don’t have to be the shy kid anymore. You get to be the nurse or the villain or the hero even. It gives you such an opportunity to step outside of your shell and a lot of times you’ll find something that you really enjoy doing and that you have a lot of fun with.”

Pennington and Neidiffer both want to continue acting next year in college through clubs or through community theater groups. Neidiffer will be attending University of Utah Honors College in Salt Lake City. Pennington will be going to the University of Alaska Southeast.

“The Dastardly Doctor Devereaux” will be performed at the Wright Auditorium Jan. 31 and Feb. 1. The show starts at 6 p.m. Doors open at 5:30. The show runs just over an hour. Senior appreciation will be Wednesday.