Deep water release required for rockfish in Southeast Alaska in 2020 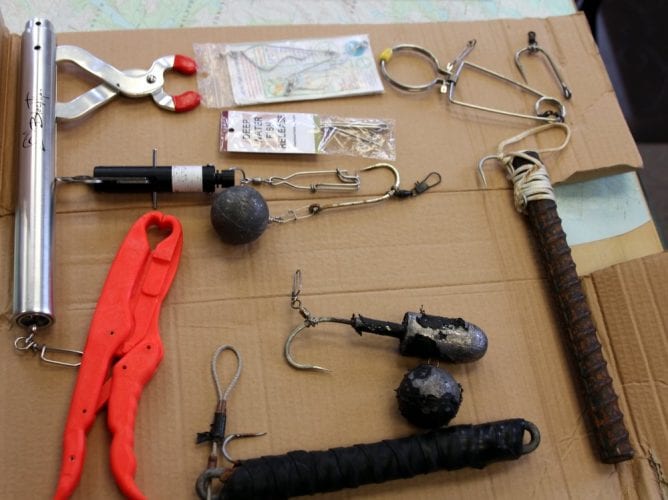 Whether homemade or a commercial design, every sport fishing boat in Southeast Alaska must have a deep-release mechanism on board January 1st, 2020. (KCAW photo/Robert Woolsey)

In two years, anglers sport fishing from a boat in Southeast Alaska will be required to have a device on board for releasing rockfish well below the surface. That’s already a requirement for the charter boat fleet. Alaska’s Board of Fisheries made the change during their meeting in Sitka in January.

Rockfish are a common catch in Southeast, often while sport fishermen are jigging bait on the ocean floor for halibut or other species. Sometimes they’re released back into the water. But pulled from the ocean depths they don’t often survive the trip to the surface. The difference in pressure expands a swim bladder in the fish and can burst organs. Often the fish are left too buoyant, splashing around on the surface and an easy target for a passing eagle. But a simple device with a big name, a deep water release mechanism, can boost the chances for survival. The board in 2012 required charter boats use the devices and the Alaska Department of Fish and Game has tried to educate other sport anglers.

Craig Schwanke is the department’s sportfish biologist for the Prince of Wales Island area. “The department has documented increased voluntary use of deep water release mechanism by non-chartered anglers and prefers the use of deep water release mechanisms by non-chartered anglers continued to be promoted through outreach rather than required by regulation,” Schwanke told the board.

Release mechanisms simply take the rockfish back down to deep water and let them go. The devices can be as simple as a weighted jig or milk carton that can be pulled off the fish once they’re down deep enough. Other devices look like a large weighted paper clip that can pulled open once they’re on the bottom.

Research by Fish and Game has found that using a deep water release can increase the chances of survival for yelloweye rockfish by 20-95 percent.
Board member Robert Ruffner of Soldotna thought the devices should be required gear. “I kinda considered this as like OK it’s just going to be another piece of gear like your flares and all your other safety equipment,” Ruffner said. “You just have to have the thing on board. I do think it will result ultimately in additional conservation of some very long lived species.”

Some species of rockfish can live over 100 years. An average of nearly 60,000 are caught in the Southeast sport fishery every year. More than 4800 are let go by anglers every year.

Other board members agreed the devices should be required for all sport fishing from a boat in salt water in Southeast. But they disagreed on how quickly the change should be implemented. The proposal originally before the board was for this year. Board members talked about one year lag time.

Former state wildlife trooper and board member Alan Cain of Anchorage wanted two years before requiring the devices. “I do think more education is needed and I do this in an effort to reduce the number of warnings and citations that might be written to a very minimum through educating the public and getting the information out there that the department has diligently done over time up ‘til now and is going to continue to do and I think it’s just a more reasonable approach,” Cain said.

The rest of the board, except Ruffner, went for that change. The amended proposal then passed unanimously. It will go into effect January 1st of 2020 and it will require the devices onboard any boat sport fishing in salt water in Southeast.