Petersburg High School plans to use alcohol sensor on students 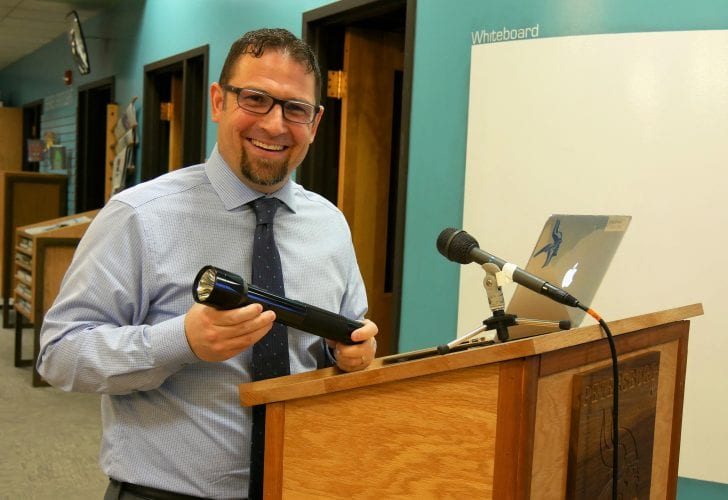 
Petersburg’s homecoming dance was held in February at an off-campus community hall. It would’ve been a completely normal affair except a few of the teenagers ended up in the emergency room after consuming a lot of alcohol.

“I think some kids wanting to have a good time were trying to consume as much alcohol as possible before the dance and that just got people in the hospital,” Dormer said, “and that’s just dangerous, that’s not what we want.”

Nothing like this had happened in the nine years Dormer has been the school’s principal but once was enough. When trying to answer the question, ‘What can you do to keep teens from secretly drinking before a school event?’ he discovered a device called a PAS, which some other schools use.

“We just got ours in the mail today,” Dormer said.

PAS stands for Passive Alcohol Sensor. It’s a hand held electronic device that detects alcohol in the air. It doesn’t require blowing into it, like a traditional breathalyzer. It measures the presence of alcohol as a positive or negative but does not determine the level.

“It looks like a flashlight,” Dormer said. “Students just walk in and they just speak their full name.”

The PAS could then detect alcohol on their breath without any contact with the device.

Dormer says the school is working with the local police department to get training and make sure they would use the device legally.

Back in February after the homecoming dance, teachers talked to students about what had happened. Dormer also encouraged parents to talk to their children at home about it and so did Superintendent Erica Kludt-Painter.

Besides educating students on the risks of alcohol, the PAS is another tool the school can use as a deterrent. Dormer says the goal is not to bust students.

“It is all about safety, it is not about busting,” Dormer said. “And we’re going to work with the police department and we don’t know what would happen if there is a positive, it could be anything as minimum as, ‘We’re going to inform your parents and get you home safe’, and it could be having the police involvement.”

Dormer says the school is still working out the details of the policies and procedures but they would like to have the PAS working by prom on May 5. They plan to talk to students and parents about it first.

School Board President, Mara Lutomski, says there are still details to work out but she supports the effort.

“Ultimately, we want students to choose to enjoy student activities sober, of course, at all times,” Lutomski said. “We would hope that this device would act as a deterrent and the student would make a better choice before coming to a school activity.”

Dormer says the alcohol sensor could also be used in the school to test things like suspicious bottles if needed.