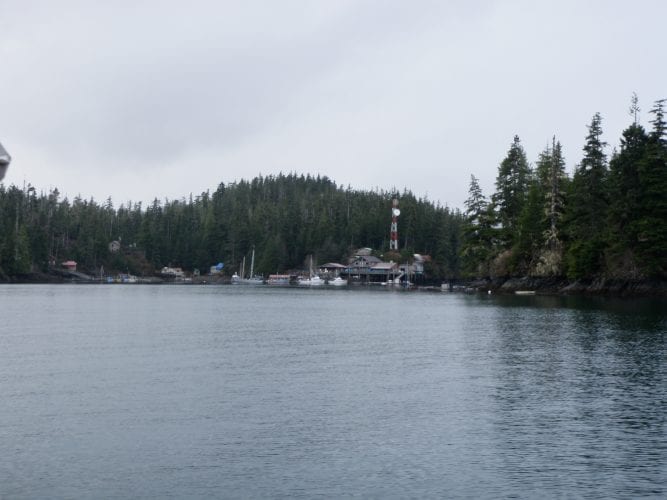 Some 200 million board feet of old-growth Tongass timber on Prince of Wales Island could be logged over the next 10 years. But the number could be a half to a quarter of that amount – or none at all. It depends on the option chosen by the U.S. Forest Service between now and the beginning of next year. The federal agency in April released a draft environmental review for the Prince of Wales Landscape Level Analysis kicking off a 45-day public comment period.

The draft Environmental Impact Statement covers management of Tongass National Forest land on Prince of Wales and surrounding islands for the next 15 years.

“The overall project is to focus on forest ecosystem health and to support community resiliency and economic development,” said Paul Robbins, spokesman for the Forest Service on the Tongass. “That’s the purpose of the project.”

“So the EIS is to show here’s the scope of activities and treatments that are going to be authorized overall but it’s not saying what’s actually going to be done and where,” Robbins said.

It’s a relatively new approach on the Tongass for considering the impacts of a project. Instead of identifying a focused location, the draft plan cites the entire pool of lands that could see logging, along with a long list of recreation projects, habitat work or other improvements. The specific work and location won’t be identified until later on in the process.

The document has a no-action alternative, under which no work would be done, and three action alternatives with a range of timber harvest. One proposes annual old-growth harvest of 25 million board feet in the first five years and 15 million board feet in the next five, or a total of 200 million board feet over the first decade. That alternative takes many of the recommendations from a team of timber industry, tribal and community representatives. The Prince of Wales Landscape Assessment Team produced recommendations in 2017, including a continued supply of old-growth timber to local mills and a long list of other restoration, recreation and education projects.

Robbins said some of the forest stands to be cut won’t end up in a mill.

“The range of management activities that are included in this environmental impact statement, there are evaluations for timber harvest and those go anywhere from the primary purpose being the harvest of timber to timber activities involving wildlife habitat improvement treatments and thinning and stand establishment,” he said. “So when we’re removing trees they’re not always going to be just for timber sales. And they also include activities in fish habitat restoration, watershed improvements, invasive plant management. It’s a very wide scale of activities happening through this project.”

The alternatives also lay out different levels of young-growth timber harvest. Over the 15 years of the project the combined old-growth and young-growth harvest could total 656 million board feet, two thirds of that young-growth trees. The document estimates that harvest would generate over 2600 jobs and more than 145 million dollars of income. Current policy allows a large portion of the wood cut to be exported for milling in other countries.

The EIS also outlines plans to use herbicides and other methods to combat invasive plants. Some new recreation cabins could be built on the island and others that don’t see much use could be taken down.

“We’re still in the midst of the review of that,” said executive director Robert Venables. “I will say that the process, I really do appreciate the way they’ve been more inclusive to those directly impacted there on Prince of Wales Island. I think that methodology and what we’ve seen of late with the Forest Service really looking more to the regional stakeholders to provide input, I think that that’s a healthy approach.”

Others are glad to see public input reflected in the range of alternatives. Buck Lindekugel, grassroots attorney for the Southeast Alaska Conservation Council, said his organization thinks the alternative with the most timber harvest is unrealistic and unsustainable but is pleased to see other options.

A completed EIS is anticipated in September with a final decision on the project expected by January.

A 45-day public comment period was expected to start around May 4th. The agency plans to hold hearings on impacts to subsistence gathering in Klawock, Hydaburg and Whale Pass.