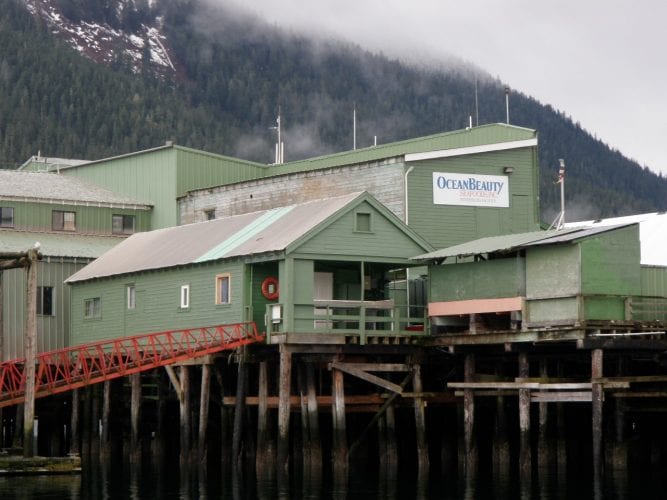 Ocean Beauty’s Petersburg plant did not can salmon in 2018 or 2017. (Joe Viechnicki/KFSK)

Ocean Beauty Seafoods has told the Petersburg borough it will permanently close the company’s cannery in Petersburg.

An August 2nd letter from the company’s president and CEO Mark Palmer says Ocean Beauty’s facilities at Excursion Inlet, Cordova and Kodiak provide it with adequate canning capacity to meet customer demand. The processor has invested money in its Excursion Inlet plant, about 40 miles west of Juneau and is focusing on more fresh and frozen processing. The letter also mentions a multi-year agreement with a floating processor vessel Ocean Fresh.

Palmer writes, “Our new configuration provides us the most flexibility and efficient business model to deal with the extreme fluctuations that have become the norm for the pink salmon harvest.”

Petersburg’s borough assembly had a brief discussion on the closure at a meeting Monday, August 6. Mayor Mark Jensen thought it’s been in the works for a few years.

“They have been removing equipment out of the building for a few years, the can lines, an ice machine,” Jensen said. “So it’s been coming.”

The cannery has not operated since 2016. It was also closed in 2010 and also in 2012. That was the year the state ferry Matanuska damaged the building. In December of 2013 the state settled with Ocean Beauty over damages from that ferry accident. The total settlement was $3.9 million, including $1.8 million in damages to the dock and just over $2 million dollars for the closure of the cannery that season. All but a $50,000 deductible was paid by the state’s insurance carrier.

When it was operating, the cannery employed about 200 seasonal workers. The decision leaves Petersburg with only one cannery at Icicle Seafoods’ Petersburg Fisheries plant.

Ocean Beauty president and CEO Palmer writes the company will miss having a large presence in the community. Some staff will remain in Petersburg to provide support to its fishing fleet.

(Editor’s note: this story has been updated)