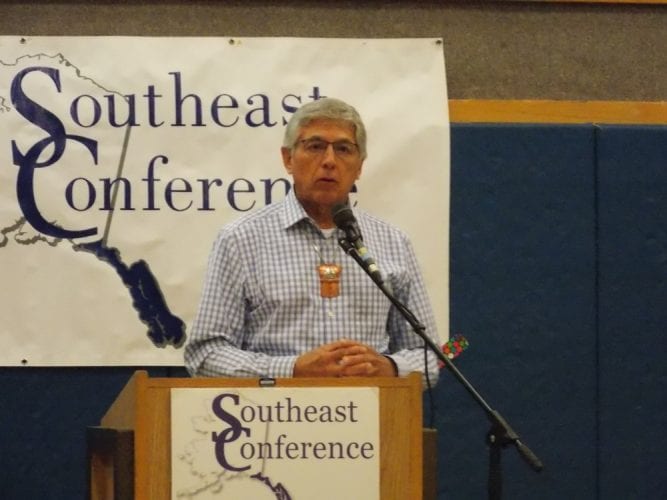 Petersburg’s borough assembly Monday took their second vote on travel spending for an upcoming annual meeting of the Southeast Conference, a regional economic development organization. This time around the assembly had the votes to approve 15-hundred dollars to send Petersburg’s nominee to the Ketchikan meeting this month, despite continued opposition.

Southeast Conference’s annual meeting is September 12-14 with information sessions on the ferry system, timber, mining, energy and the visitor industry among other topics. Petersburg will be sending the borough’s voting representative, mayor Mark Jensen. Assembly member Jeff Meucci has also asked to have the borough pay to send him. Brandi Marohl questioned Meucci Monday about approving this travel cost when he has questioned the need for that in the past.

“Whether or not the mayor wants to support me personally, that’s fine,” responded Meucci. “But as mayor, as one of seven people on the assembly, we’re giving marching orders to how to proceed. If a member is going to go down to Southeast Conference and not support me for the board of directors, I just thought it might be a good idea to go down there and introduce myself to the representatives who are voting for the seat.”

The assembly last month nominated Meucci for a seat on the organization’s board of directors but did not vote on a motion to nominate both Jensen and Meucci for that seat. Jensen, attending this month’s meeting by phone, explained he was frustrated by that lack of a second.

“I feel that it’s kind of a disservice to the public when somebody makes a motion, member (Brandi) Marohl did at the first meeting to put both of our names on the ballot, there was no second,” Jensen said. “So that takes away member Marohl and myself’s position on this issue and I don’t think that was right for the public.”

The vote in August was 4-2 to nominate Meucci for the seat with Jensen and Brandi Marohl voting no. Jensen has since said he wouldn’t be voting for Meucci at the Southeast Conference meeting.

In response, Jensen pointed to the assembly’s appointment of Bob Lynn to the board of the Southeast Alaska Power Agency board of directors. “This same assembly did this in January, didn’t second motions by member Marohl to put people on the SEAPA board and without any discussion it appears to me like some of these votes are determined before the meeting even starts,” the mayor said.

That decision actually happened last December when a majority of the assembly went with Lynn over Jensen’s brother John for the voting seat. It was also a 5-2 vote with Jensen and Marohl in opposition. Jensen’s complaint sounded like he was accusing the rest of the assembly of violations of the state’s Open Meetings Act. And it prompted this question from vice mayor Jeigh Stanton Gregor.

“I admit I was confused by the insinuation that members of the assembly were making decisions before they sat down. I’m not sure if you want to clarify that or not. That seemed like it was bordering on an accusation of the assembly,” Stanton Gregor said.

“All I would say is it just appears that way to me,” Jensen responded. “I’m not accusing anybody of anything.”

That you for the clarification Mr. Mayor,” Stanton Gregor said.

The vote for Meucci’s travel cost also went 5-2 Monday, with Jensen and Marohl opposed. That means both Meucci and Jensen will travel to Ketchikan for the meeting. The money will be taken out of the assembly’s budget for this year.