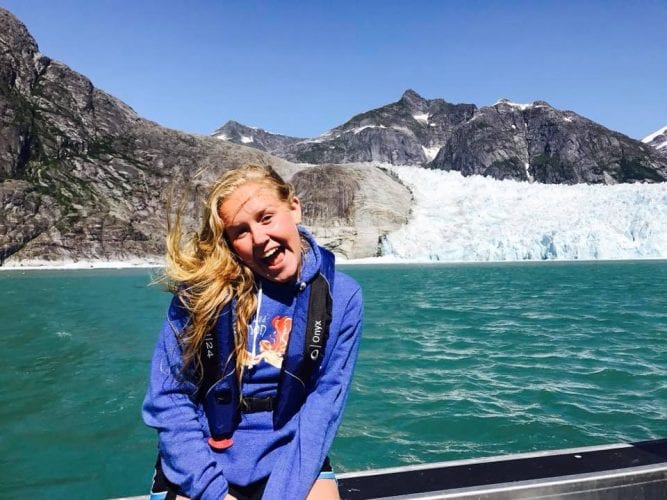 Meghyn Parker, a junior at Petersburg High School, shares her story of being diagnosed with depression and anxiety in the hopes that it helps others understand mental illness. (Photo courtesy of Michele Parker)

Mental illness isn’t always an easy subject to talk about but one teenager in Petersburg wants to help change that. She’s telling her story of depression and anxiety in the hopes that it helps others.
(This report may be disturbing to some people.)

You can’t always see it. It’s not like a cast on a broken leg. But nonetheless, depression is a medical illness that might need professional help.

Take Meghyn Parker for example. She’s a fashionable junior in high school with blond hair and blue eyes. She has friends and participates in extracurricular activities. She’s an athlete, competing in basketball, cross country, and swimming. But alongside all of that, she has a mental health disorder. She was first diagnosed a year ago with depression and anxiety.

“When I was first diagnosed I kept it a secret,” Parker said. “My family knew but that was it. None of my friends knew.”

She wrote a poem about it titled, You Are Me.

She wrote the poem in January, “and at that time–and still currently–I was suffering with severe depression and general anxiety disorder,” Parker said.

Although she’s comfortable talking about it now she didn’t share the poem with anyone for months. Her negative thoughts would keep her down.

“It’s almost like everything that you hear. . .you could hear a positive comment about yourself or you could hear a saying that somebody says to you but instead of picking out the positive things in it you pick out all the negatives and you just keep thinking about it until it’s so overwhelming that’s all you can think about,” Parker said.

Parker was out of school last year for a few months dealing with her depression. It wasn’t the first time she saw a doctor for it. She sought professional help in the 6th grade. It seemed to subside for a few years and then came back.

Through therapy, she’s learned skills to help her cope. She can recognize when negative thoughts are happening and knows steps she can take to stop it like journaling and talking to others.

She learned the importance of communicating at a two-week camp for depressed teens last year in Minnesota.

“I did not feel fixed,” Parker said. “I mean, it doesn’t get fixed in two weeks, but I did feel a lot more supported.”

The camp was hosted by the Mayo Clinic and also included the parents of the teens. Parker still communicates regularly with others who attended the camp through texts and emails.

“They understood me and what I was going through on a whole different level than anybody else,” she said.

One in four people will experience mental illness. There’s a whole spectrum of depression. Sometimes it’s shorter-term situational depression and other times it’s a life-long struggle.

“I think there’s a lot of misconceptions about it,” said Kate Smith, a therapist at Petersburg Mental Health. “There is that certain perception from some people where if they don’t see it they don’t really quite understand it or know really what’s going on. And I think in society sometimes there’s that ‘pick em up by their boot straps’ kind of mentality and not to seek help.”

Sometimes depression can cause suicidal thoughts. Family and friends might not know if that’s happening or not. Some signs and symptoms include taking risks that are out of character, giving things away, talking or writing about death, being withdrawn, or losing interest in certain activities.

But Smith stresses these signs don’t necessarily mean suicidal thoughts because it’s different for everyone. She says it is okay just to ask.

“Asking somebody, ‘Are you suicidal? Do you have thoughts of self-harm?’ That is okay to do and it’s important to do and it will not put that thought into that other person’s head.”

Now, Parker writes every night in a journal before she goes to bed. It helps her form her thoughts and understand her feelings.

“When I’m feeling better–feeling that happiness–I’ve learned along the way that it’s worth it to feel that happy to feel that carefree rather than just ending it before you can feel that,” she said.

Parker hopes by sharing her story that some of the myths and stigma surrounding mental illness will end.

Counseling can cost money but not always. Petersburg schools have counselors who see students for free. Petersburg Mental Health Services is in Petersburg’s school every Tuesday-Room 214.

Petersburg Mental Health Services has a sliding fee scale for clients unable to pay for counseling in full. They also accept Medicaid and Medicare and they have staff available to help with filling out those forms.

True North Counseling in Petersburg has a sliding fee scale on a limited basis.

Services at WAVE are free 24 hours a day.

Other services include SEARHC and local churches.

People are also encouraged to open up to their doctors about their mental health as well.

If you or someone you know is having suicidal thoughts, you can call the free Suicide Prevention Hotline 24-hours a day at 1-800-273-8255.

More information on suicide can be found at the Suicide Prevention Resource Center.