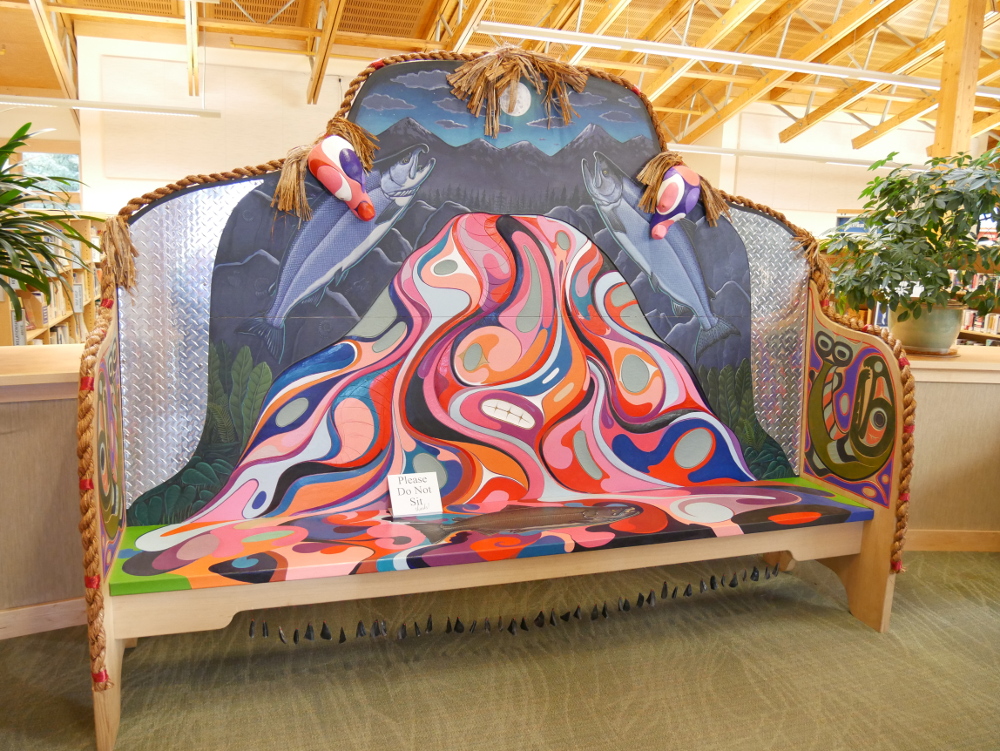 A multi-media exhibit of works by Alaskan artists called “Decolonizing Alaska” opens at two venues in Petersburg Friday night November 2nd. The touring show features 30 pieces made by 31 artists, including paintings, carving, sculpture, video and weaving. Petersburg is the last stop on a two-year tour for this show.

It’s hard to miss one of the first new additions to the Petersburg Public Library, a nine-foot long carved and painted red cedar bench. Ray Troll and Donald Varnell of Ketchikan collaborated on the piece, called “Ectoplasmic salmon settee” and fellow Ketchikan artists Nathan Jackson and Delores Churchill also pitched in on the work. It’s a piece while on display in another community that caught the eye of the library’s program coordinator Jessica Ieremia.

“You know it was just kind of interesting to think that Petersburg could have something of this size come here,” Ieremia said of the show. “And so it was quite a bit of a journey trying to find partners to do this.”

The library was able to secure grants and donations from the Petersburg Community Foundation and the Trading Union to bring the show here. It will be up for a month and because of the size and number of the works will be on display at both the library and museum. At the library pieces are in display cases, and hung on the walls throughout the building. It will take some work by viewers to find some of them. But a map of their locations and a brochure with a description of each work will help. 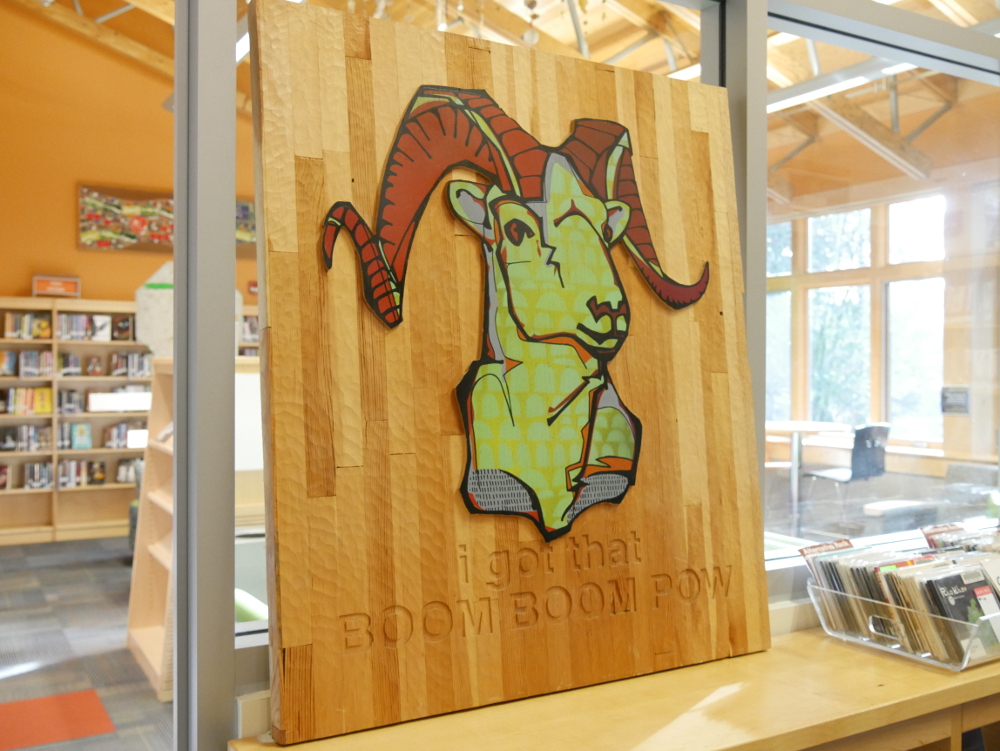 Rachelle Dowdy’s 2015 piece “I got that boom boom pow” is carved and painted wood. (Joe Viechnicki/KFSK)

Asia Freeman is artistic director of Bunnell Street Arts Center in Homer and curated the exhibit. She said over the past five years she began thinking about the themes of equity and inclusion in Alaskan art.

“There’s a number of very vibrant Alaska Native artists who are working in ways that aren’t entirely traditional and there’s also contemporary Alaska artists who are non-Native that are curious about and exploring materials we would think of as more indigenous, cedar wood, fish skin, depicting Alaska Native performance artists through like video and moving making,” Freeman explained.

Freeman said she saw themes emerging, with artists talking about difficult issues relating to the colonization of Alaska.

“And to do that they needed to use some materials that felt in some ways more, as Native artists, perhaps a little more provocative and edgy, recycling things, making statements about reusing materials and reflecting on traumatic experiences at times,” Freeman said. “And also artists who are non-Native really are recognizing shared concerns and themes around issues of land and fisheries management, subsistence and commercial, some of those issues and tensions and also climate change.”

The works look at attitudes of consumption of Alaska’s natural resources and themes of equality, cultural identity, a person’s relationship with the natural world and challenging the definition of Alaskan art.

Holly Nordlum, an Inupiaq artist born in Kotzebue, has a four foot tall portrait of her younger brother Drey, done in beer bottle caps. Freeman explained it’s a work that tells the story of the artist’s brother being taking from a drunken mother.

“And in this story Holly’s telling something true,” Freeman said. “It’s something really poignant. It’s very painful and it’s extremely brave. And it’s really a story of survival and how a family saved itself, you know. And she’s making a testimony to that. And that’s very powerful and it’s much more than marketable.”

While some of the works use found man-made items like bottle caps or spent shell casings, other use natural materials, hair, porcupine quills and fish skin. 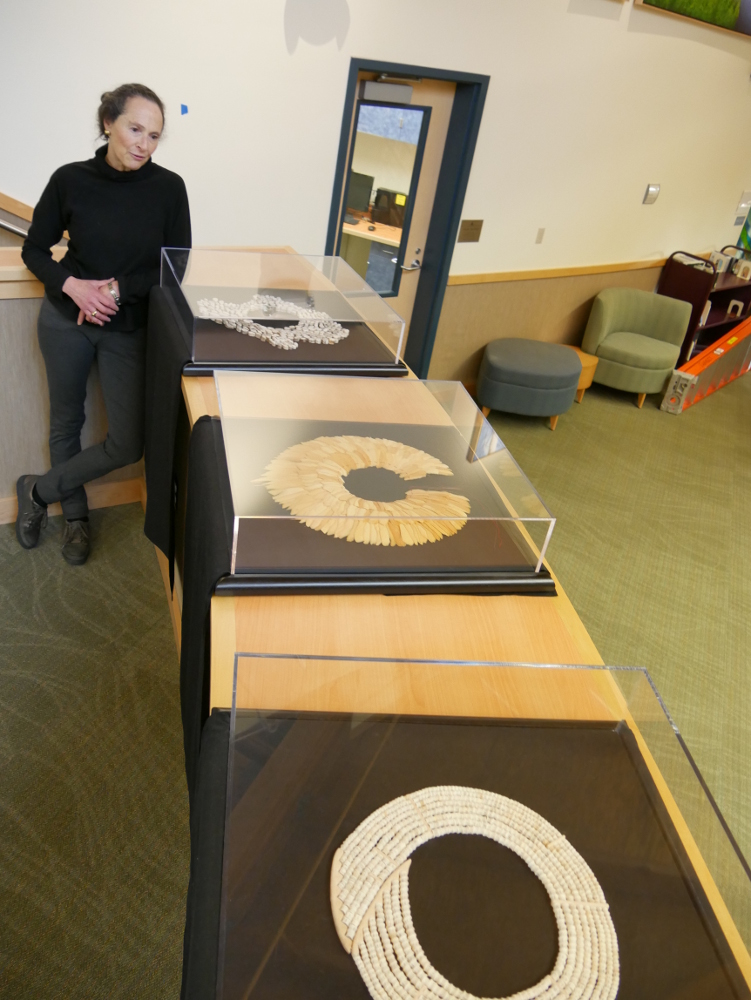 Rika Mouw of Homer has traveled with the show and helped hang the works this week. She has a background in jewelry making. Her work is called “We All Living Beings” and is three collars made of natural materials. They’re meant to evoke the collars worn over robes by justices of the Supreme Court.

The collars are made with sliced caribou antlers representing the arctic coastal plain, shavings of yellow cedar of the Tongass National Forest and sockeye salmon bones for Bristol Bay’s bounty. She explains she wants to give a voice to the natural world. 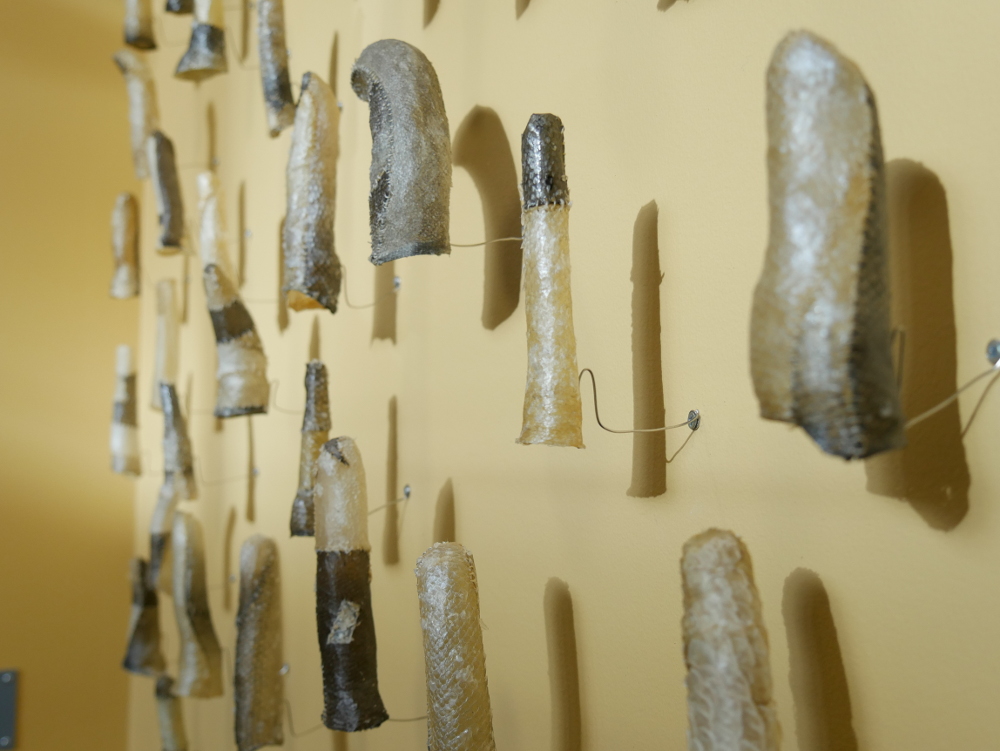 The show opened in Homer in 2016 and has also been displayed in Valdez, Washington D.C., Juneau, Ketchikan and Fairbanks. Curator Freeman noted that the themes of the art are especially topical. “One of the things I think that makes the topic of colonization so hot right now in this country is that we’re just really dealing with the fact that we’ve never had reparations, truth and reconciliation around the very you know complex story of colonization which has led to people who are of mixed background and colorful stories of survival and resilience,” Freeman said. “In the end it’s not a dark story, it’s just a nuanced one that deserves to be told and through artwork I think we can say hard truths in a beautiful way.” 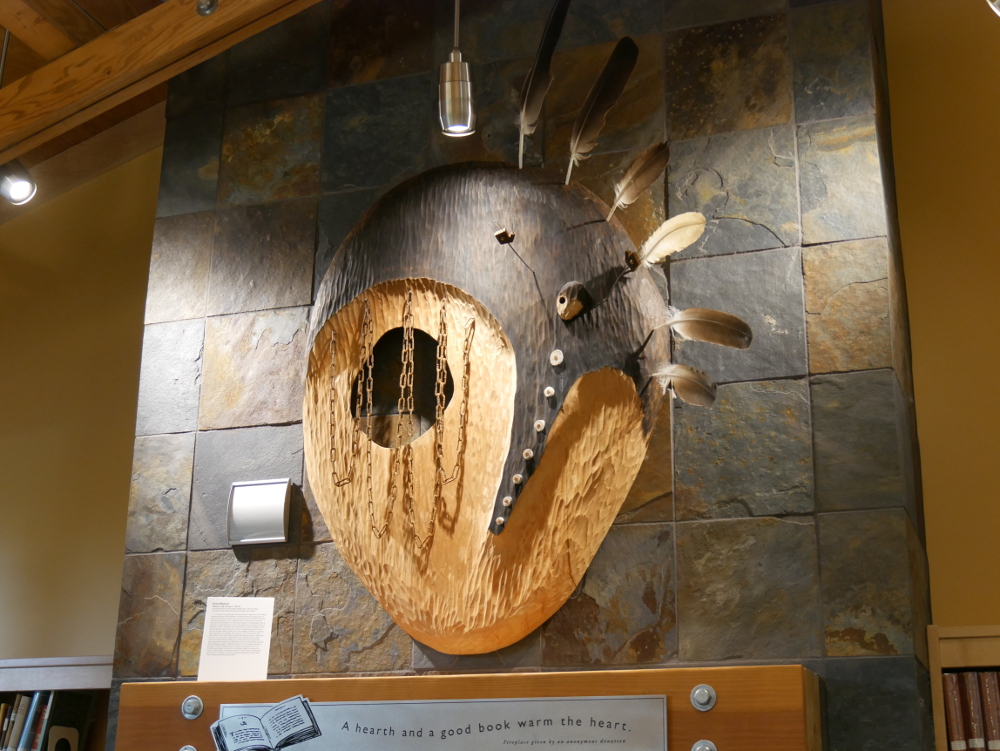 A 2014 carved basswood and mixed media work by Drew Michael is called “What Is My Story?” and hangs over the fireplace at Petersburg Public Library. (Joe Viechnicki/KFSK)

Decolonizing Alaska will be on display the library and museum thru November 30th.

An opening reception is at the library Friday, November 2 at 6:30 p.m.. Freeman will start with a presentation on the show and then lead a tour of the works, finishing the night at the Clausen Museum. 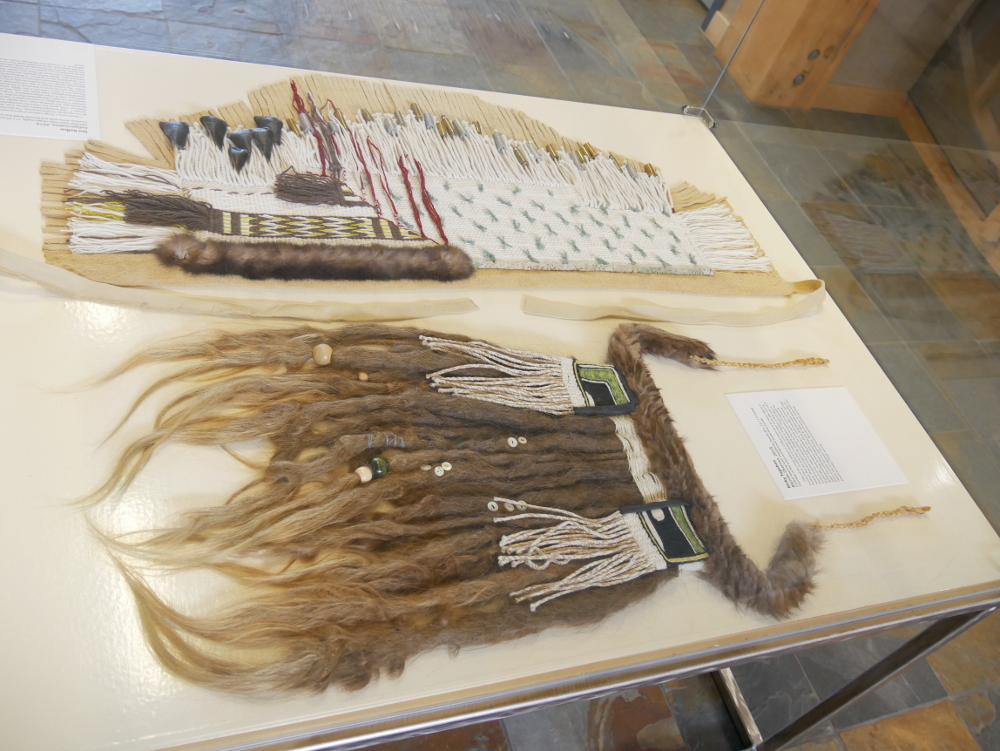 At front, Ricky Tagaban’s 2015 “Blonde Shaman” made with hair and beads and behind it, a 2016 Ravenstail Waist Robe “Indigenization” by Teri Rofkar. (Joe Viechnicki/KFSK)