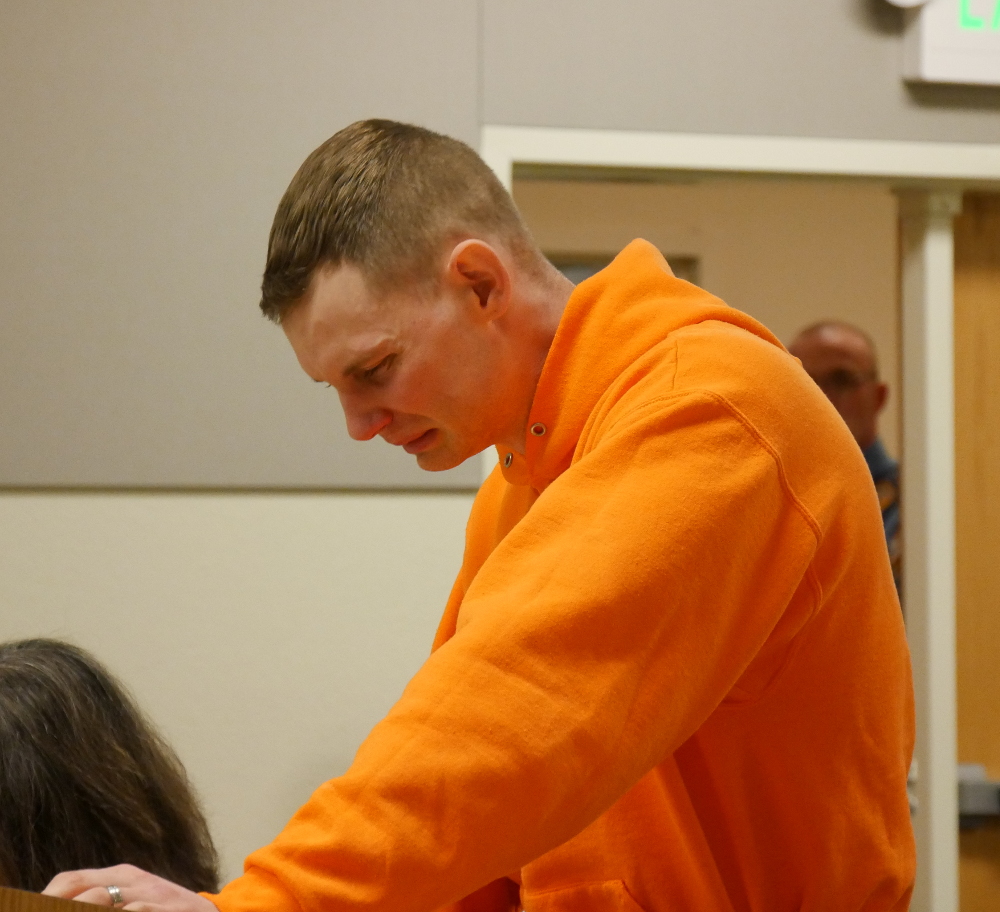 A former Petersburg borough employee was sentenced Monday for the fatal van wreck of July 4th, 2016. 25-year-old Chris Allen asked for forgiveness from the families of two killed in the crash. He will serve a portion of seven years of jail time.

Chris Allen suffered a seizure while at the wheel on the morning of July Fourth when the van went off the road and flipped. The 23-year old and the three other borough employees were helping to set up for a running race for the borough’s Independence Day celebration. The crash killed 18-year-old Molly Parks and 19-year-old Marie Giesbrecht, the daughter of the borough manager. A third passenger, Catherine Cardenas, 19 at the time, was injured but survived along with Allen. A grand jury indicted Allen on charges of second degree murder, manslaughter and assault, alleging he ignored doctors’ orders not to drive after a documented history of seizures.

In front of a packed courtroom with family and friends of both the victims and the defendant, R.D. Parks talked about the impact of losing his only child, who would have turned 21 next month.

“Our daughter Molly was a vibrant young woman who was excited about life,” Parks said. “She was looking forward to going off to college in the fall. She was looking forward to becoming an elementary special education teacher. She was looking forward to someday getting married and having a family. As a result of this horrible crime, I will never see our beautiful daughter again, see her graduate from college, drink a glass of champagne with her at the top of the Eiffel Tower, walk her down the aisle at her wedding, or hold my grandchildren. Because of this horrible senseless crime, there’s a huge hole in me that can never be filled and I will never again be the man that I was.”

Molly’s mother Madonna said she couldn’t forgive Allen and the couple left the courtroom when it was Allen’s turn to talk. The Parks family asked the judge for a longer jail sentence.

Janet Kvernvik, the mother of one of Molly’s best friends, asked the judge to consider that Allen continued to drink alcohol despite acknowledging it as a trigger for his seizures.

“I know that your sentencing won’t bring back these beautiful girls but you can reinforce to Chris Allen that this was not an accident,” Kvernvik told the judge. “It was his selfish, self-absorbed, narcissistic, immature act, the last act for Marie and Molly. Ultimately, Chris Allen along with the people that failed him and the people that enabled him caused the death of Marie Giesbrecht and Molly Parks.”

Representatives of the Giesbrecht family did not testify but prosecuting attorney Adrienne Bachman related some of the conversations she has had with Mary Rokey, mother of Marie.

“Even though she did not want to commit to inner-most thoughts and put them on paper and submit them for public review, Ms Rokey who is a very private person, wants the court to know when she read the submissions from the Parks family and friends, those experiences and thoughts mirror, mirror was the word she used, what the three surviving Giesbrecht family members here in Petersburg have and continue to experience,” Bachman said. “She said it was ironic that they are essentially identical in processing the overwhelming grief that Marie’s death brings her family.”

Superior court judge Trevor Stephens received over a hundred letters from friends, family and community members on behalf of the victims and the defendant. Some of them supported Allen, testifying to his character and his remorse for the wreck.

His step-mother Valerie Allen said alcohol and drugs were not involved in Allen’s most recent seizures or on the day of the crash. She testified to his character saying that he was quick to help others.

“I’m so sad that the families feel that Chris doesn’t feel responsible or show any remorse,” she said. “I have watched my son punish himself on a daily basis while he was on house arrest. He would stay in his room and refuse to come out because he didn’t feel he deserved to be around us. Sometimes he would, we would have dinner. But I watched him suffer so much and I just want the family to know that he does, he wanted to reach out to them but he’s not been allowed to.”

Allen, who turns 26 next month, sat just feet away listening to the testimony from his family and the victims’ families. He stared at the floor, sometimes sobbing and saying he was sorry, sometimes with his head in his hands below the courtroom table. When it was his turn to talk he asked for forgiveness.

“I am truly sorry,” Allen said. “My stupidity has changed the lives of the families and torn a hole in this community that can never be filled. Petersburg is my home town. I will always love you all. I am sorry I hurt so many of you. I have taken a special part of this world away from you because of my recklessness that fatal morning.”

Back in August, Allen pleaded guilty to one consolidated charge of manslaughter in return for the state dropping the other charges. A plea agreement included a sentence of 16 years in jail, with nine of those suspended, giving him seven years. The Parks family did not want Allen to be eligible for early release, which could have had him paroled as soon as next April. Judge Stephens doubled that time frame to 42 months of jail time before Allen would be eligible for release, not counting time off for good behavior. The judge thought Allen was remorseful and had good prospects for rehabilitation. But he was also concerned with Allen’s unwillingness to address his medical condition. He echoed the term Russian roulette, used by families and friends of the victims.

“It’s not a one in six chance that when you drive something bad’s gonna happen,” Stephens said during sentencing. “It’s a lesser chance yet the possible consequences are greater. You lose Russian roulette the only person affected is the player. Him driving a car endangers any passenger he might have, anybody walking down the street, anybody in another vehicle. So in some respects it’s much more serious than that.”

Allen will get credit for the nearly year-long house arrest at his parents’ house in Fairbanks as well. He agreed to a request by the state to revoke for life his ability to have a driver’s license. And after jail time he’ll be on probation for five years after with various conditions including testing for drugs and alcohol.

Under this criminal case, the Parks are also seeking restitution for lost wages and retirement benefits for Molly’s mother Madonna, who said she’s been unable to return to work at the U.S. Forest Service. That decision on restitution will be made at a later date. The family has also filed a separate civil suit seeking damages from Allen, the borough and the state.

(Editor’s note: this story has been updated to removed exact reference to the number of letters received on behalf of either the defendant or victims)