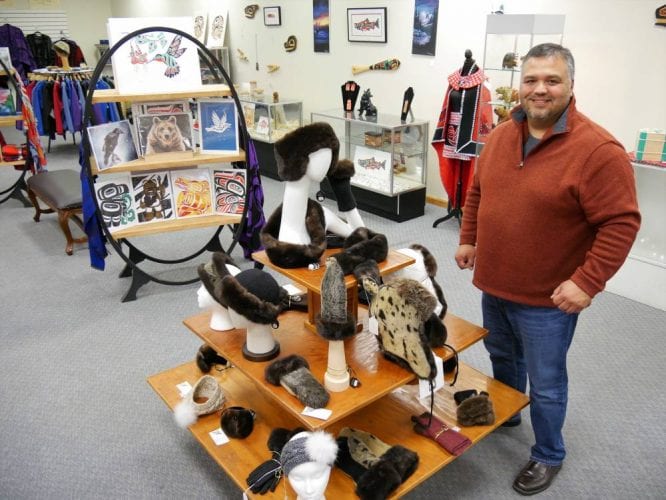 Petersburg resident, Will Ware, stands near sea otter products in his gallery, The Cedar Box, in downtown Petersburg. (Photo by Angela Denning/KFSK)

Alaska is one of the few places with a legal sea otter fur trade. The species is listed as endangered in some areas but in Southeast Alaska they’re booming. As Angela Denning reports for CoastAlaska’s “Alaska Made” series, there are tight restrictions on who can work with the prized pelts.


Sea otter is the densest fur in the world, with upwards of one million hairs per square inch. Downy hairs that can take to the air when cut.

Petersburg resident, Will Ware, is sewing with it, hunched over a sewing machine in his living room. His sleeves are rolled up and he’s meticulously sewing a pair of seal skin mittens. They have three inches of sea otter fur at the top. Ware’s been hunting sea otters for about eight years. Often with his sons. The fur is tanned in the nearby village Kake. He tries to use every inch: the pelts can run up to $200 each. 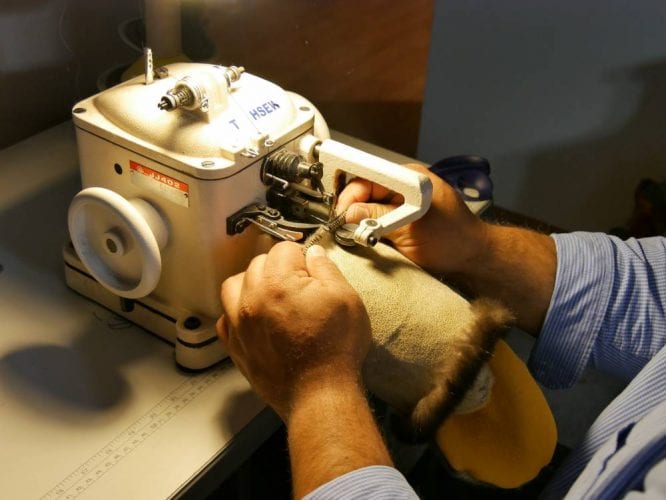 Will Ware sews a pair of sea otter mittens in his living room. (Photo by Angela Denning/KFSK)

Ware is Tlingit from the Taakdeintaan Clan.

“Our people, our clan were known for hundreds and hundreds of years as the harvesters of sea otter,” Ware said.

There’s no harvest limit for Alaska Natives. He bags about 30 to 40 sea otters per year to make a variety of items like hats, mittens, scarfs, and teddy bears. It’s not a huge money maker. He’s got a full-time job. But he also owns a gallery in Petersburg and sells his work online.

About 90 percent of the world’s sea otters live in Alaska. They were nearly wiped out in the early 20th century by the fur trade. In the 1960s, about 400 animals were brought from the Aleutians to repopulate Southeast. And it worked. 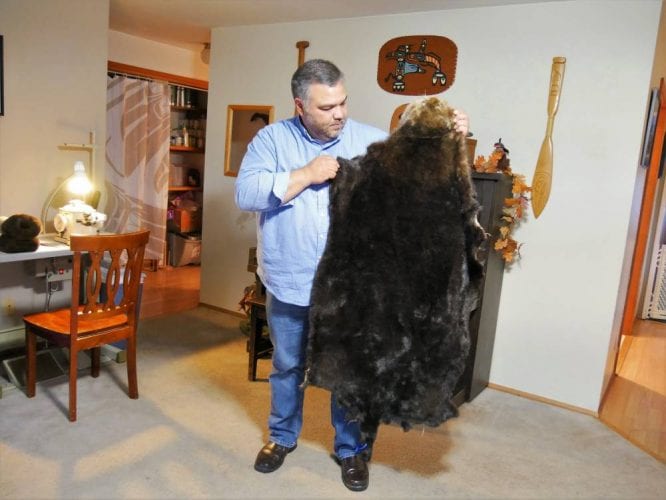 Petersburg resident, Will Ware, stands with a sea otter pelt he harvested in Southeast Alaska. (Photo by Angela Denning/KFSK)

Now fishermen often complain there are too many. The sea otters eat up the shellfish—crab and sea urchins—that fishermen catch commercially. Sea otters can weigh 100 pounds and eat a quarter of their body weight a day.

Ware says they’re tough, smart, and “they’re absolutely adorable when you see them, you know, they’re cute. They just happen to carry and wrap themselves up in the best fur in the world.”

But the modern sea otter trade is slow going.

Across town there’s a workshop happening to teach people how to sew the hides–by hand. Half a dozen students sit around a table covered in brown sea otter pelts.

Marcus Gho is the instructor brought to town by the Sealaska Heritage Institute in Juneau. He helps a student smear a thin layer of glue over a seam. 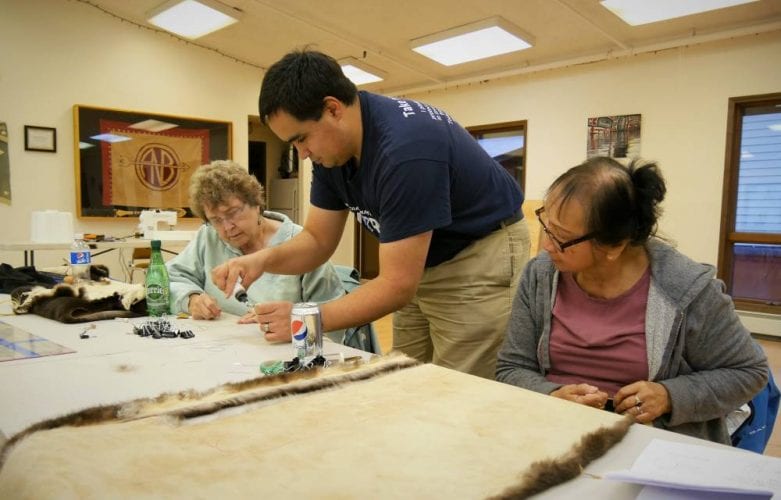 Marcus Gho instructs Jeanette Strickland (left) and Pauline Young on how to sew with sea otter pelts in a Sealaska Heritage Institute workshop in Petersburg. (Photo by Angela Denning/KFSK)

“Some things turn out better when they’re sewn by hand,” Gho said. “Like these pill box hats, I always sew them by hand.”

Federal regulations prevent mass production of sea otters. One must be at least a quarter Alaska Native to possess tanned, unmodified skins. Sea otter products can’t be produced by people working together. It has to been done by individual craftsmen.

But jumping through regulatory hoops is worth it for Gho. He hunts up to 40 sea otters a year and says it’s not about money. 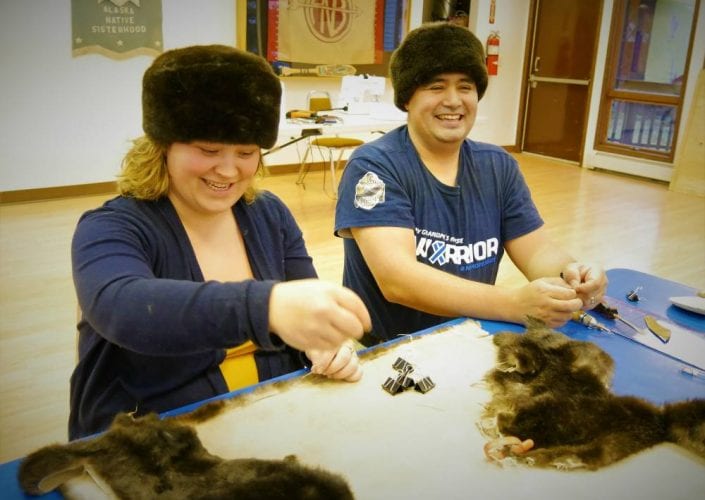 “When I sew and work with my sea otter fur or seal fur or any marine mammal fur I feel a stronger connection to my ancestors,” Gho said, “and I’m grateful for the opportunity that I have to let other people have part of that connection too.”

If this class is any indication Alaska Natives will continue the craft. And there should be plenty of sea otters to provide the materials. 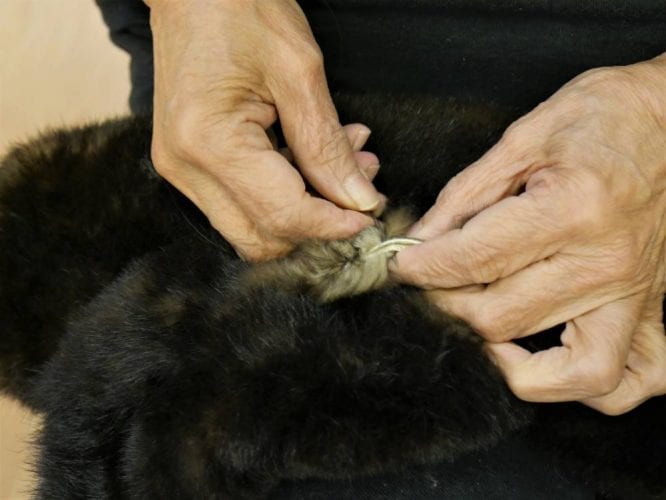 Sea otter fur is the densest in the world with up to one million hairs per square inch. (Photo by Angela Denning/KFSK)

The population in Southeast is growing steadily. Eight years ago a survey counted about 25,000 animals. Scientists estimate a growth rate that could put the current population over 40,000. But the data is old and the U.S. Fish and Wildlife Service is gearing up for an updated survey in the next year.