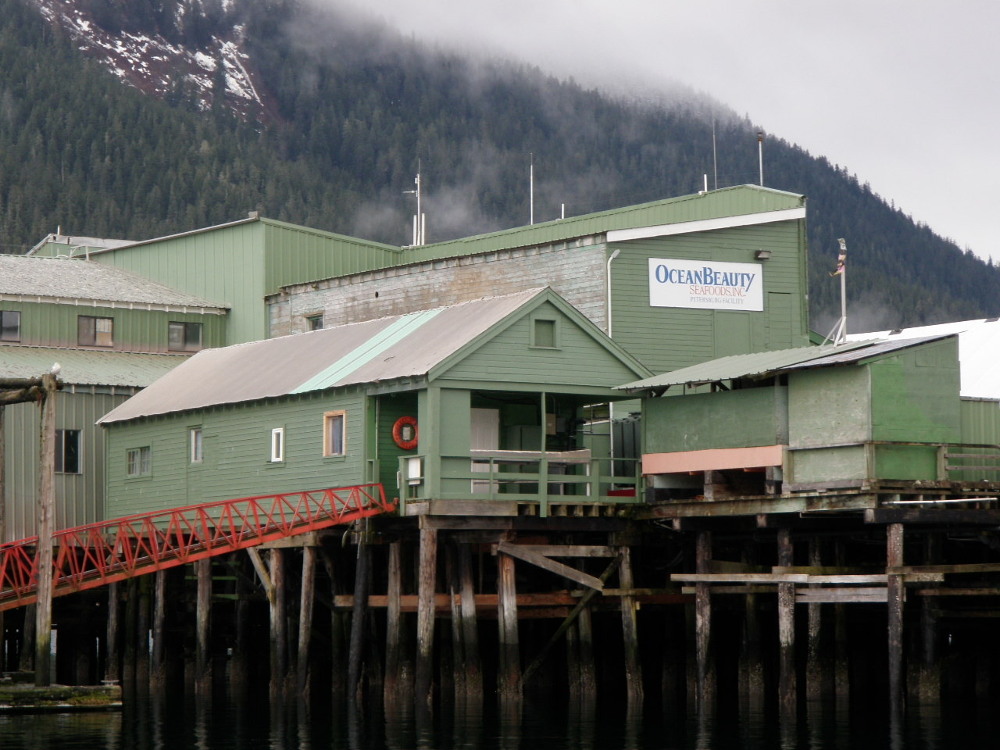 Ocean Beauty Seafoods permanently closed its Petersburg plant in 2018 and is selling the property for $3.4 million. (Joe Viechnicki/KFSK)

Some of the top news stories in this community in 2018 were debates over sales tax for the municipality and whether the community wanted more visits from cruise ship passengers.

Voters in October supported keeping an exemption for people 65 and older from the borough’s six percent sales tax. Citing declining state and federal revenue for the municipality, some local residents including some seniors sought to replace the exemption with a needs-based annual rebate check.

“In the age of the aging population and declining state money we are facing an ongoing problem these next few years,” Sue Paulsen urged the assembly in June to put the issue on the ballot. “We’re hoping the voters will endorse this plan as part of a larger plan. Let the debate begin. Please, put this question on the ballot.”

The vote was almost 3-1 to keep the tax break. And while it won’t be ending, there will be a $100 new fee for exemption cards starting in 2019, although low income seniors can have that fee waived.

In another move to raise money for the municipality, the assembly also voted to start up a cruise ship passenger fee in 2019, similar to one charged in other Southeast ports. Since Petersburg doesn’t receive the volume of visitors in larger towns, the new fee is only expected to bring in at most around 30,000 dollars a year.

Meanwhile later in the year the community started up a discussion about expanding the visitor industry. That followed interest from Viking Cruises, a company with 900 passenger ships.

Local resident Brenda Norheim summed up some of the fears about tourism becoming too big for main street. “It starts out as a good thing and as time goes on, then they start bringing in their own people and cut out the local and then before you know it you have these international diamond stores moving in,” she said during meeting in November. “I know you say that’s not going to happen here but we’ve seen it happen in other places.”

Mayor Mark Jensen drafted a letter asking Viking Cruises to wait on planning stops here. But the assembly voted down that letter in November after local business owners came out in support of a larger industry presence.

Petersburg received some good news in April when the U.S. Coast Guard announced plans to station a new 87-foot patrol boat here. It will replace the 110-foot cutter Anacapa. The 110-foot cutters are being replaced by larger boats, located in other ports. The mayor and other borough officials worked with Senator Dan Sullivan to secure that commitment after it seemed like Petersburg was not in the plans for a future homeport.

Ocean Beauty Seafoods this summer announced it would close its Petersburg plant permanently. The processor said it needed flexibility and efficiency with extreme fluctuations in the pink salmon harvest from year to year. The building on Petersburg’s waterfront is for sale for 3.4 million dollars. The closure leaves Petersburg with only one cannery and has impacted operations at the community cold storage which cut hours and its manager’s pay this fall. Ocean Beauty was an anchor tenant there.

The catch of pink salmon in the region this summer topped just eight million fish, the lowest since 1976. It was also just the second time in history that the region’s catch of pink salmon was surpassed by the number of chum salmon netted. In fact a late season hatchery chum return south of Sitka led to a new one-day chum catch record for seiners. Fishermen were also seeing an unusual number of jellyfish in the water this year, filling nets and fouling lines.

In late spring, two local teenagers, Sebastian Davis and Jasmine Ohmer, were fined and given community service hours for running into deer with their truck. That was after their video of the crime circulated around town.

A warm, dry summer led to a low water levels in hydro-electric reservoirs including Petersburg’s Crystal Lake. Wildfires across the border forced the evacuation of Telegraph Creek along the Stikine River in British Columbia.

A food supplier’s shipping problems led to empty shelves at Hammer and Wikan grocery store and others in Alaska. It also impacted the store’s bottom line during the busy season for supplying local residents, fishing fleets and visitors.

In September Petersburg’s post office was shut down for over a week, when workers discovered a small amount of mercury spilled from a package there. Limited services were offered nearby at the Petersburg Indian Association during the clean-up.

The driver of a borough van that crashed July 4th, 2016 was sentenced this December. The family of Molly Parks, one of the two people killed in that wreck also filed suit this year to recover damages from the driver Chris Allen, along with the borough and the state.

The assembly in March finalized a controversial restructuring of local utilities, eliminating the job of electrical superintendent and creating a new utility director’s position. The move was proposed as a cost saving measure by borough administrators but it was opposed by some employees and members of the public.

Mayor Mark Jensen, who resigned over the proposal the year before, continued his opposition. “I’m worried that if we don’t have the right expertise in place driving this boat we’re going to end up at some point down the road in trouble so I will not vote for any of these restructuring ordinances,” Jensen said in February. A petition with more than 200 signatures was not enough to sway assembly members and the reorganization was completed.

The union representing most borough employees filed an unfair labor complaint against the borough for its bargaining stance after voting down a tentative contract agreement in the spring.

“When you ask or put something on the table and their answer is not only no but hell no, that is not very professional of a negotiator. And the hell no disposition ran through that whole negotiation,” Joe Bertagnoli told the assembly in May. He was on the employees’ negotiating team. The borough and employees did come to an agreement on a new three-year contract, with a retroactive wage increase but they’ll be back negotiating their next contract in a little over a year.