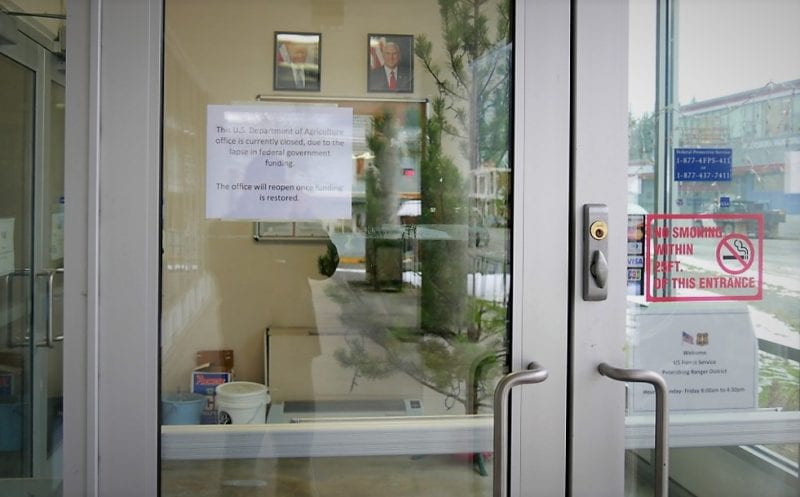 A sign about the federal shutdown hangs on the door to the U.S. Forest Service building in downtown Petersburg. (Photo by Joe Viechnicki/KFSK)

Friday marks the second payday when many federal workers are getting nothing. The partial federal shutdown began December 22. Some federal workers aren’t allowed to work and others are working but not getting paid. As KFSK’s Angela Denning reports, many local businesses in Petersburg have come forward to help.


Federal employees make up a sizeable chunk of Petersburg’s population. There are over a hundred federal workers through the U.S. Forest Service, the U.S. Coast Guard, and the Transportation Security Administration at the airport.

Businesses with the Petersburg Chamber of Commerce have come together to offer $50 gift certificates to affected families. Chamber Director, Mara Lutomski, says the certificates are good for most businesses around town.

Other businesses are offering additional help.

Lee’s Clothing is giving away their own $50 gift certificate to families, which are good through April 15. Store Manager, Cynthia Mattisen, says they want the gift certificates to help cushion the strain of the shutdown.

“We just felt like we wanted to take action because the shutdown was going on so long,” she said. “Our thought was just with so many local families being affected that possibly we could help out so that kids could get shoes for sports or the essentials that they need for all the activities that they’re in to just ease the burden a little bit.”

“Because people got to eat,” said John Mason, manager of the Hammer and Wikan company, which owns three stores in town.

“We believe in giving back to the community and this is—although it’s a small way—it is a way for us to show the community that we care,” he said.

The idea to help started with former Coast Guard workers now employed at the grocery store. Mason agreed with them and then got permission from the company’s board of directors.
He says the families can charge purchases at the store interest free for six months.

“If it needed to be open for longer we’ll cross that bridge when we need to,” Mason said. “Once the federal government is back in service they would have an additional six months to a year to pay it off, which will also be interest free.”

The local fish processor, Tonka Seafoods, is offering five pounds of free shrimp to furloughed families. The side stripe shrimp can be picked up at the company, located just south of downtown.

Tonka’s Chief Finance Officer, Seth Scrimsher, says it’s a way of supporting and giving back to the community.

Wells Fargo bank is postponing loan payments and late fees for certain customers whose income has been affected during the shutdown. It’s on an individual basis so customers should check with them on the details. First Bank is offering similar help.

Likewise, Petro Marine Services won’t charge any late fees or interest on payments that can’t be made for fuel.

“I think it’s a very nice act of kindness during a kind of unsettling time for a bunch of people in Petersburg,” Meucci said. “I think it’s very commendable and I just wanted to thank those businesses.”

Lutomski says she’s not surprised that the local businesses came forward to help.

“It’s just par for the course for Petersburg,” she said. “I mean we’re always ready to reach out a hand to our neighbor. It’s just who Petersburg is.”

Furloughed families might also find some financial relief through student meals at the schools. The free breakfast and lunch program is offered according to current incomes and can be applied for at any time.

The donations and assistance from local businesses require families to give their name and where they work. Some places, like the banks, need a little more information than that. Furloughed workers can sign up for a charge account with Hammer and Wikan at the administrative office downtown, upstairs of the convenience store. Affected residents can pick up Chamber gift certificates Monday, Wednesday, and Fridays from 10 to 2 at the Chamber office. The Chamber has more details about participating businesses. Also, the Bible Church is hosting a spaghetti dinner for affected federal workers Jan 27th at 5:30 pm at the church.