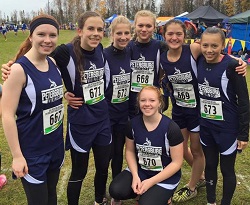 The girls team came in fourth behind teams from Homer, Grace Christian and Anchorage Christian, all 3A schools. Team titles are only awarded to the top 4A schools and the top schools among the 1A-2A and 3A conference combined.

The meet was on a muddy course at Bartlett High School in Anchorage Saturday. That made for challenging conditions.

“Well we’ve kindof gotten used to crisp, clear, golden orange days the last three years up there at state,” said to Petersburg coach Tommy Thompson. “This year we got up there and there was about an inch and a half of snow on the course from a couple days previous and lots of mud and lots of leaves. So it was definitely a slippery treacherous (winding) rolling course to be tackled.”

Petersburg’s top runner for the girls was Kayleigh Eddy. She finished in 26th place, with a time of 22 minutes and 10 seconds. Avery Skeek was right behind her, finishing 27th. Erin Pfundt took 34th, Julia Murph was 43rd and Hannah Pfundt was 48th. Madisyn Parker was 87th and Alexandra Bless was 99th among the small school runners.

Thompson said his team was ranked fifth going into the race. “So we said well you know if one runner for one of these teams ranked ahead of us doesn’t do very well since it’s such a team sport, lets really go for it and everybody have their best race,” he said. “And you know they really did. Their times, they weren’t PRs timewise but the course wasn’t particularly fast and they had some great runs.”

“Hannah and Tucker have been with us for as long as they’ve been in high school I think Hannah might’ve missed her freshman year,” Thompson said. “And Stu has also been with us all four years. So it’s been nice. For me I can go back and look at pictures of Stuart when he was a freshman, running in Sitka, very first race, big wide-eyed and then he came so far. It has been particularly nice to have Tucker and Stu because they were four year lettermen and they’ve just kinda hung with me for the four years through all the mud rain and snow. So it’s been really great having both those guys and Hannah with us and Maura who joined us this year, she was really nice to have towards the end of the season.”

Thompson said his teams will return some younger runners for next season and hopes to recruit more.