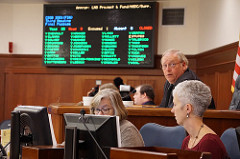 Legislators from Southeast Alaska this week joined most of the rest of the House and Senate in supporting a buyout of TransCanada from the Alaska natural gas pipeline. Senators and representatives from the Panhandle see the project as a long-term source of revenue but agree that tougher decisions on a short-term budget fix are needed in the legislative session that starts in January.

The vote was 39-0 in the House, and 16-3 in the Senate to approve spending 158 million dollars. That money will buy out TransCanada’s share of the Alaska gasline project and fund engineering, design and legal work by state agencies.

“For something as expensive and vital to Alaska’s economy as this, I think people at the end bought in,” said Juneau Democratic Senator Dennis Egan. He said the issue was contentious at the beginning of the special session but did not end that way.

Egan’s colleague in the Senate, Sitka Republican Bert Stedman said he didn’t need to be convinced on the buyout. “I had the opposite position of most of my colleagues in that I didn’t support TransCanada being in there in the first place,” Stedman said. “And I was ready to give them an eviction notice, hand ‘em a check and send them on their way as soon as possible.”

Canandian company TransCanada has been a partner in the project, along with the state of Alaska and energy giants BP, Conoco Phillips and Exxon Mobil. TransCanada has also been pursuing the Keystone XL oil pipeline as well as liquid natural gas pipeline across north British Columbia.

Alaska’s gas pipeline would allow shipment of North Slope natural gas to Asian Pacific markets. When asked whether this month’s vote would bring the project closer to happening, Stedman said he wouldn’t phrase it that way. “It brings the state into alignment with the other partners so one partner can’t take advantage of another one,” Stedman said. “In other words, if there’s a change in pricing of the gas or pricing of running the pipeline, the gasline or the LNG plant, everybody’s going to gain or lose together.”

Stedman and other legislators say the issue is an important one, because it would be another revenue source for the state. Juneau Republican representative Cathy Munoz said it’s a big decision for all of Alaska because of the financial requirements for the project. “We’re talking about anywhere from 45 billion to 65 billion dollar project and Alaska’s share as an owner will be 25 percent of that,” Munoz said. “So I think it’s very important that everybody is up to speed and very aware of what’s happening.”

Munoz serves on the House finance committee which took a role in review of senate bill 3001, the legislation that made appropriations for the buyout, along with engineering, design and legal work and analysis. “I thought the administration did a very good job of providing good testimony through the commissioner’s office,” said Munoz. “We also heard from the attorney general as well as other members of the partnership. We heard from Steve Butt the project director and overall I think we developed a very good record of support for SB 3001.”

Munoz thinks the state is making good progress on the project. She pointed out another decision is coming up December 4 . That’s when the remaining partners, the state and oil and gas companies have to agree on the next budget to fund upcoming work on the gasline.

Juneau Democrat Sam Kito said he had some concern over TransCanada’s involvement in the project, ever since the passage of Senate Bill 138, the legislation that enabled the state to negotiate agreements with the gas line partner companies. “So what we were doing with TransCanada is foregoing some of our early costs and then actually paying them back with interest so it seems like with the project the way it is with them providing financing services more than pipeline services, we also are having an opportunity to go out and look for financing support just as we will for our half of the project, or for our portion of the project anyway.”

Kito called this one of the decision points for the project. He noted other decisions about engineering the pipeline are coming up in the next year or two. He agreed the gasline could be an important source of revenue for the state, at least in the long term. “The gasline revenues don’t arrive for at least 10 years so we do have to figure out how to make our budget work for the next period of time,” Kito said. “We don’t have savings that will last us for 10 years so that’s going to be the big discussion that I would anticipate we need to have during this next legislative session.”

Kito’s colleague in the house, Ketchikan independent Dan Ortiz thought that it is important to find different ways to close the budget gap from declining oil revenue. “You know this is some we’ve been thinking about for a long time, 40 years in some folks’ estimation,” Ortiz said. “For us to get to this next step, it’s important and one that as evidenced by the vote at least on the house side of 39-0 got full support. And so, yeah, overall I cant think it’s anything but positive in terms of us moving down the road as a state and getting the gas pipeline.”

Ortiz commended the Walker administration for the information given during the special session. And like his colleagues he noted the real tough decisions are coming up. “We all probably left the session knowing that a break is needed because we have some real tough heavy lifting to look at in the regular session coming upcoming here on January 20th. So people just looking forward to get to the holidays and to get with their families because we know that come January 20th things are going to get heated again and they’re gonna require some real heavy lifting.”

Governor Walker called the gas line the state’s number one get well card and applauded the legislature for their vote during the special session. Walker signed that legislation on Thursday.