Fallen tree in Ketchikan takes out power in Petersburg 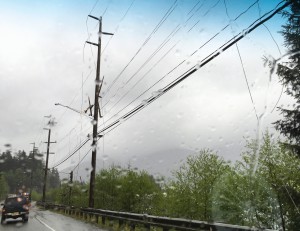 Donato said crews responded and cleared the tree for traffic to resume. Crews now are working to restore power to various portions of the Ketchikan electric system.

The Ward Cove area, though, will take a while.

“Unfortunately, that’s going to be out of service probably the remainder of the day as we chip away and repair all that,” he said. “We’ve lost about three spans worth of lines. Those lines include the very highest ones there, which are the 115KV lines from SEAPA and then the subtransmission and distribution lines below those. Most of those got wiped out by this tree.”

Because the tree took out the Southeast Alaska Power Agency lines, the outage traveled all the way to Petersburg. That community lost its feed from Tyee Lake, and then had some trouble with its backup generators. Petersburg’s outage lasted about two hours.

Wrangell lost power for a short time, as well.

The intertie allows SEAPA to use power from both lakes more efficiently. But, Donato said, there’s sometimes a downside.

“That’s the unfortunate part of an interconnected system, right? You end up with a phenomenon that rocks the boat at Beaver Falls and you end up tripping them off in Petersburg,” he said.

Donato didn’t yet have an estimate on how long the repairs would take in the Ward Lake area. We’ll have an update later today.