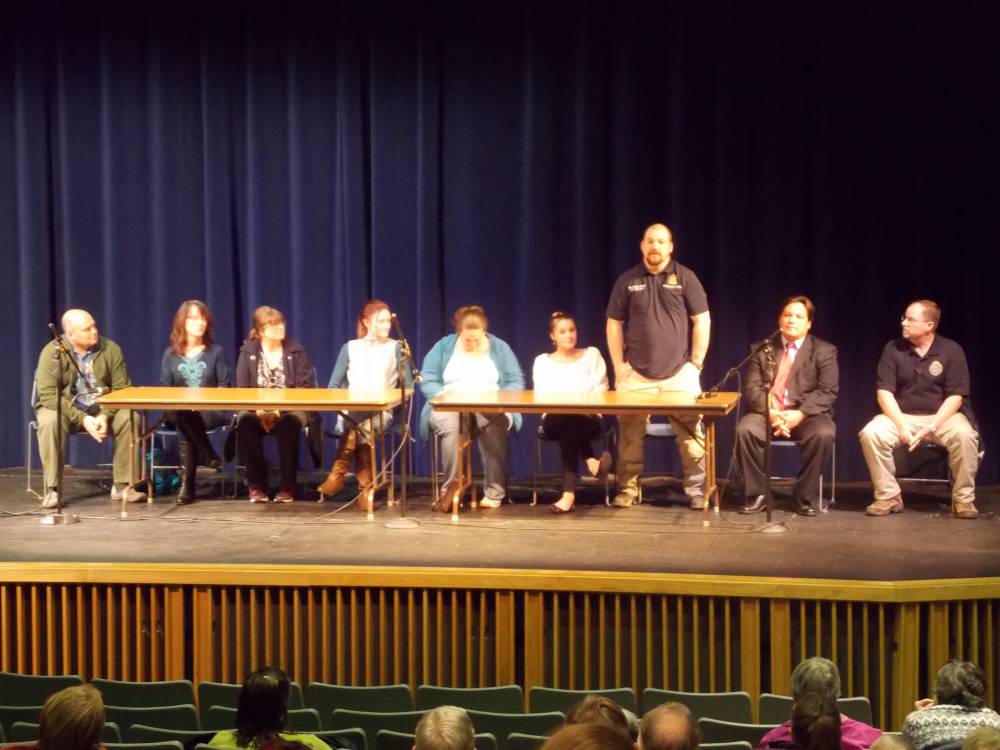 Community members in Petersburg late last month continued an ongoing discussion about the problems of substance abuse locally. A panel of law enforcement officials, former drug users and health professionals answered questions on the scope of the heroin and opiate problem in Petersburg and ways to help.

About 50 community members including parents and a few kids attended a screening of the movie Chasing the Dragon. It’s about the lives and deaths of people addicted to heroin and prescription pain pills, released this year by the Federal Bureau of Investigation and the Drug Enforcement Agency. It’s available to view online and has been shown in several other communities in Alaska this fall.

Audience members wondered about the scope of the drug use problem in Petersburg and how it compared to the rest of the country.

“One in five nationwide have tried opiates,” said assistant U.S. attorney Jack Schmidt. “But in Alaska it’s double. So 40 percent.” Schmidt said federal law enforcement has been jailing people for drug offenses for decades to try and reduce the supply.

“Looking at supply side, we’ve done that but I think we also need to have the other side which is the demand side and try to look at prevention,” he said. “That way we don’t have new addicts replacing and then we can work, focus on supply side and hopefully that will curb use and overall the amount of drugs on the street.”

Schmidt related a story of prosecuting an oxycontin ring, only to force addicts to turn to cheaper heroin. Police locally have said they can do little to make an impact on the supply of drugs coming into the community. Panel members explained with a big mark up in price, the profit margin for bringing drugs to small towns in Alaska will keep that supply at a high level

Petersburg Police chief Kelly Swihart recommended a holistic approach including getting addicts into recovery and making sure that recovery is completed.

“We need to make sure that we’re doing programs like this to try and prevent things and reduce that demand and we have to hold people accountable,” Swihart said. “Accountability. It’s got to be a multi-faceted holistic approach or we’re not going to get on top of this thing.”

Several recovering addicts answered questions from the audience. Casey DenAdel counseled parents to be involved in their kid’s lives. “Most addicts I know have some kind of mental issue going on but you don’t know that with addicts,” she said. “There’s usually a co-occurring disorder. And a teenager’s not going to tell you that. Do you know any teenagers that’s gonna say hey, I’m depressed, I have anxiety, I have PTSD from being bullied or being raped. No you don’t. So check in with your kid about these things.” 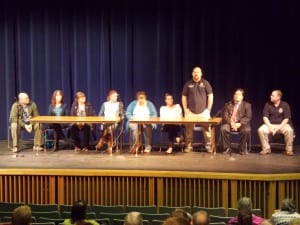 Former drug users agreed the reality was 10 times worse than what was portrayed, despite the shocking stories in the movie.

Rashele Wilsonoff also suggested knowing signs of addiction. “A lot of parents like you know, there’s a list, if your eyes are glazed or slurring your words but there’s a lot more to watch for like somebody had mentioned, if you’re missing tin foil,” Wilsonoff said. “It sounds so crazy. But things like tin foil. For me I would never wear short sleeve shirts around my family, it was always long sleeve shirts.”

“If all your pens are taken apart, the insides are gone out of your pens, you’ve got a problem,” DenAdel said.

The former addicts said there was no one factor that made people start using drugs or become addicted but they’ve all agreed there needs to be more in Petersburg to help people trying to stay clean. Following two other community meetings this year, former addicts have started up a support group that meets on a regular basis and they’re seeking a place to hold those meetings.

The panel also recounted the difficulties of getting into a drug treatment program. Petersburg Mental Health Service’s Susan Ohmer related a tale of trying for four months to get one local man into a recovery center. “It’s not easy to get into treatment so we can’t just say send ’em to rehab,” Ohmer explained. “30 days later they come back to a place that has its challenges. I think we as a community, I would love to see more of a recovery supportive community. I think we’re all good people. Yes here, because, even if they want to get into residential treatment and that’s what they need, they’re not going tomorrow.”

Audience members wondered what to do if they had a teenager using drugs. The response was to first step find out what kind of drug. Ohmer suggested family support. “If you get your child into treatment, come with them. Family, bring the family. Dropping your child off at our offices won’t help us much. Because he’s going to need everybody’s support,” she said.

The discussion focused on the increased use of prescription pain killers and how that can lead to an opiate addiction, something covered in the film.
Pharmacist Erica Worhatch responded to a suggestion about increasing advertising like that used to discourage tobacco use. “You gotta remember that opiates are a great drug when you need them,” Worhatch said. “We’re not going to cut people off of pharmaceuticals. I mean you don’t use nicotine or cigarettes medically whereas you’re dealing with a substance that is creating this problem that oftentimes gets its foothold from a medical standpoint.”

“I tell people right out of the gate whether it’s cough medicine with codeine or oxycontin, take care of this,” Tucillo said. “This is negotiable currency in Petersburg. That is the way I describe it to people, it’s negotiable currency. And you will have new friends if they know you have it.”

Police chief Swihart urged people to destroy old medication or turn it in to the police.

Some audience members thought the movie lacked any positive message, a portrayal of people who have been able to get clean, or any solutions to the problem. Others who attended hoped the movie would be shown to local school students. School district officials said they wanted to do some preparation before holding their own panel discussion for kids.