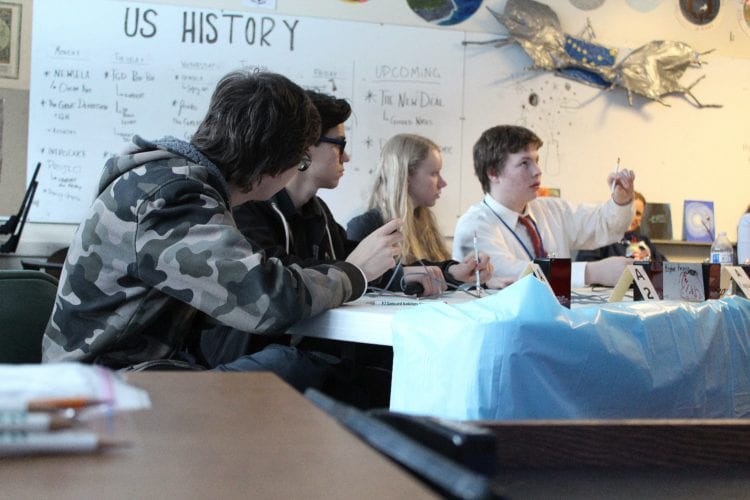 Petersburg’s High School science bowl team took fourth place in the paper and presentation portion of a state-wide Science competition in Seward Alaska. The team went to the National Ocean Sciences Bowl to compete with teams from around the state. KFSK’s Angela Denning has more:

The National Oceans Science Bowl in Seward has three parts: the quiz bowl and presentations along with a paper turned in before the trip. The presentations are on 15-page research papers that the students spent all year preparing.

The event was held February 17-19. The group flew to Anchorage and then drove cars to Seward on the Kenai Peninsula.

The Petersburg team took fourth place for the paper and presentation and eighth place in the quiz bowl.

Helen Martin is the team’s captain.

“We’ve done better in past years but this is our first year without some of our seniors that have gone four years,” Martin said. “Since we’re all Juniors I think we did a pretty good job.”

It was Martin’s third time to the competition which made her one of the more experienced members of the team.

“It was interesting to see how this year compared to my freshman year and how confident I felt going into the presentation and the quiz bowl,” Martin said.

The quiz bowl is arguably the hardest part of the competition. It’s kind of like a science trivia game or science jeopardy. Students buzz in with their answers to questions. Only four team members can play at once. Junior Gabe Torres remembers being on the sidelines when he could have helped out.

“The question was, ‘plankton is a plural term. What’s the term for a singular plankton? And I heard them talking about it because it was a bonus question so the team gets to confer and like talk. And so they were like, “is it just Plankton again? Maybe it’s just Plank? I don’t know. And I’m thinking it’s plankter, it’s plankter. I remember this because it sounds weird. (laughs)”

Every year the state competition has a topic that the students research. This year it was how a warming North Pacific impacts different areas of Alaska. Petersburg students focused on the retreating Leconte Glacier located near town. Some of the students had been to the glacier through school survey teams and were familiar with research being done there by scientists. 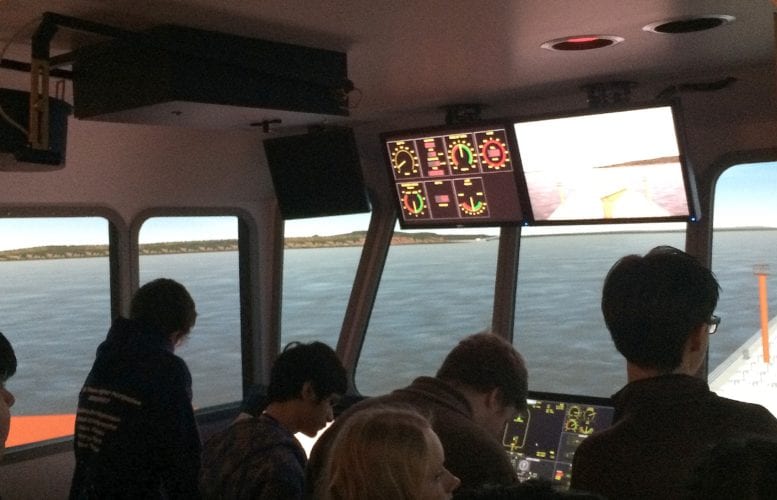 Petesburg NOSB students check out a virtual bridge on a ship set up to teach mariners skills in Seward. Photo courtesy of Joni Johnson

Each of the students had a section they produced for the paper and the presentation. Junior Henry Short looked at the economics of the Leconte glacier retreating and how it might affect tourism.

“There’s about 1500 tourists that go to the glacier yearly,” Short said.

Short found that although it would impact the local economy Petersburg would still get money from other parts of tourism like hotels and lodges.

Martin found that a future impact would be to the harbor seals living in Leconte’s fjord.

“Luckily that isn’t something that is happening yet, so they are not being threatened,” Martin said. “But if Leconte continued to retreat the icebergs that they haul out on for their pupping and molting seasons would diminish as well as a food source for them because fjords are very productive.”

Also on the Petersburg team was Joey Giesbrecht and Anders Christensen.

All of the students have to know their stuff. The presentations happen on stage in an auditorium. All of the other teams as well as the judges and coaches are watching. Petersburg’s coaches are Joni Johnson and Sunny Rice. Johnson says although her team didn’t have any seniors this year, all the players stepped up to participate in the quiz bowl.

“We had Helen this year who wasn’t buzzing in that much last year who did a great job a few times, we had Gabe buzzing in, we had Henry buzzing in, so I mean there are more people buzzing in. And Joey also, sometimes he has good educated guesses, sometimes he knows and sometimes he’s just out there. But, you know, it was a definite group effort,” Johnson said. “And Anders Christensen is amazing. I mean I think all eyes would often turn to Anders during quiz bowl rounds because his memory is like a lock box for a lot of things and he’s quite knowledgeable. But it was just fun to watch them. And it was fun to watch them have fun and interact with the other teams more than I think they have in the past. They were just a bit looser that way which is, you know, part of it.”

Also at the NOSB event, the students were able to visit the AVTEC school in Seward. They saw a virtual bridge on a ship set up to teach mariners skills. Anders Christensen was able to virtually move freight from a boat to a dock with a crane.