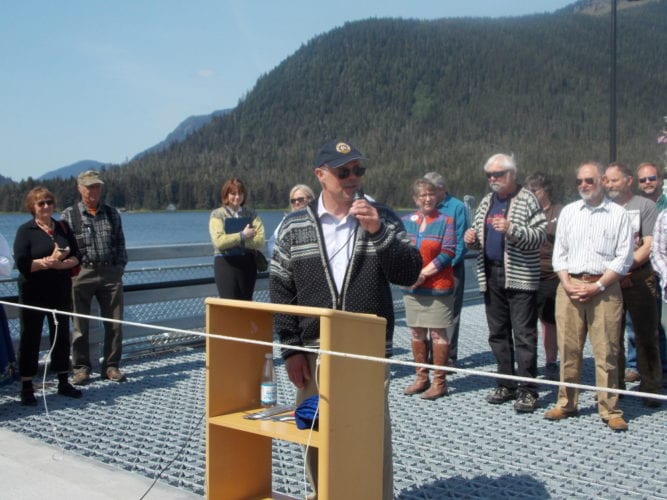 Petersburg’s former mayor Mark Jensen resigned this month following a disagreement over a proposed reorganization of department heads at the borough assembly’s last meeting. Jensen says he doesn’t have the energy to continue on as mayor with that proposal still a possibility.

The 61-year-old welder and commercial fisherman has been the borough’s only mayor since its formation in 2013. He also served on the council for the city of Petersburg prior to that.
He sat down with Joe Viechnicki Friday morning, May 26 to explain his decision.

Borough manager Steve Giesbrecht proposed the re-organization with the June 30th retirement of Power and Light superintendent Joe Nelson. He wants public works director Karl Hagerman to take on the electrical department oversight in a new role of utility director. His assistant, Chris Cotta, would become the public works director. Giesbrecht said Petersburg could not afford to hire another electrical engineer to fill Nelson’s job and he said the reorganization would save the borough 108-thousand dollars.

At the assembly’s last meeting there was little support voiced for the plan and opposition from employees of the electrical department. It did not seem the reorganization was going to happen. However, the assembly did not take a vote on the issue. Hagerman said he didn’t want to accept that new role without assembly support. Now it sounds like there may be support among the assembly to move forward with the changes. It’s the subject of a closed door executive session at Tuesday’s meeting. The assembly will have to decide whether to advertise the power and light superintendent’s job or approve the new job appointments for Hagerman and Cotta.