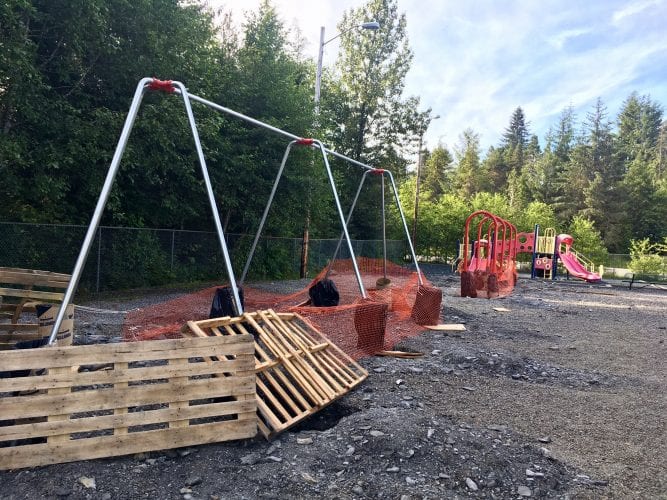 New swing sets are being installed at the Rae C. Stedman Elementary in Petersburg. Photo/Angela Denning

The playground at the Rae C. Stedman Elementary School in Petersburg is getting some new equipment. The topic was part of a discussion at the last school board meeting about maintenance projects. KFSK’s Angela Denning reports:


Out with the old, in with the new: the school district has replaced some outdated playground equipment this summer.

There are two new swing sets on the east side of the grade school. Maintenance Director, Dan Tate, told the school board that workers are still installing it.

“We have been promised cement this week so I’m crossing my fingers that that happens,” Tate said. “The servicing mulch is on its way to finish that project up and we should have that wrapped up by the first or second week of September.”

Some older wooden playground equipment was removed this summer after a study was done showing it needed to be replaced. Superintendent Erica Kludt-Painter said that the school’s administrator, Teri Toland, has been working on making the changes.

“I know Mrs. Toland actually started a conversation with parents and people last year about some different planning on the playground based on some recommendations from some of the experts but also just to talk to parents and families about what kinds of things people might want to see on their playgrounds and how that might look,” Kludt-Painter said.

Kludt-Painter says there could be more changes to the grade school playground coming in the future. The play structure near the office entrance might be moved to the other side of the building to comply with requirements involving the foam material on the ground.

Other changes could be to the style of the playground. The Superintendent says there’s a growing recognition that playgrounds should include areas of play that are more natural, where kids can play and get dirty. She says structured equipment is important but it should be one part of a playground.

“We have found here at the elementary school [that] kids will find the stream beds, they make dams, they have rocks, they have a whole structure for their whole community over there,” Kludt-Painter said. “I mean it’s elaborate, elaborate, and if you mess with it, it’s a big deal. It’s fabulous. It’s wonderful. So, having more of that, actually.”

Another playground improvement this summer was repainting the covered area on the east side of the school. Tate says it’s gone from red to blue.

“We stripped that of rust and gave it three coats of cobalt blue paint. That was quite a job,” Tate said. “Rans, Jake, Vicki McIntosh and myself undertook it, about two weeks-worth of work right there.”

There have been several other maintenance projects that have been completed indoors this summer including new carpet and paint in some rooms, window replacements, and chair cleaning. The galley kitchen in the middle school teacher’s lounge was also redone.

At the school board meeting, the board approved a list of capitol improvement projects requested by the state. Not much is being funded now because of the state’s fiscal crisis. The Petersburg School District in recent years has gone ahead with some maintenance projects which they hope to get reimbursed.

That’s what they did when purchasing new boilers for the middle and high schools.

Next up on the maintenance list are food service renovations at all of the schools including a kitchen at the high school.

“You know we’d like to have a basic sort of kitchen,” Kludt-Painter said. “Groups could use it for different things and it could be some fundraising opportunities and also just we need a place for kids to eat that’s an actual cafeteria space.”

The state flat funded education this year. Although funding to the district won’t meet the cost of year to year inflation, it’s something that the school district planned for. The school board passed a budget in June with a two and a half percent reduction, which they plan to revise now that they know they’re getting more.

If people are interested in serving on the playground committee for the Stedman Elementary they can contact the principal Teri Toland at the school.