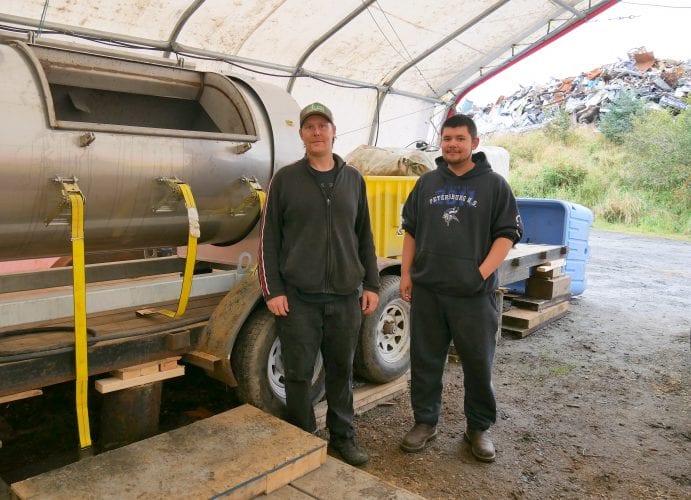 Brandon Thynes, Petersburg Indian Association’s Tribal Resource Director, and his assistant, Clifton Gudgel, stand next to the tribe’s new composting machine, which is housed in a portable building at the Petersburg Borough’s baler facility. (Photo by Angela Denning/KFSK)

Two things that Petersburg has a lot of are fish and wood. And one thing the local rocky terrain is short on is dirt. But given the right circumstances you can get dirt out of fish and wood. KFSK’s Angela Denning reports on a new business venture by the local tribe, Petersburg Indian Association, to provide the town with locally-made, environmentally friendly compost.

Walking on the road into the landfill, you pass by piles of automobiles, rubber tires, and eventually come to three large, white portable buildings. This is where the local tribe makes compost. In one of the tents is a large stainless steel machine that’s cylinder in shape sitting on top of a trailer. (It’s called a Nioex Biovator) The tribe paid $15,000 for it and had it shipped in this fall from Manitoba, Canada.

“We have a load in it right now and it’s been cooking since last Friday,” Thynes said. “You just kind of layer it like lasagna with wood chips and fish waste and wood chips to cover it so it doesn’t smell.”

Thynes and his assistant, Clifton Gudgel open up the lid and he’s right, it doesn’t smell. It just looks like dark brown wood chips. 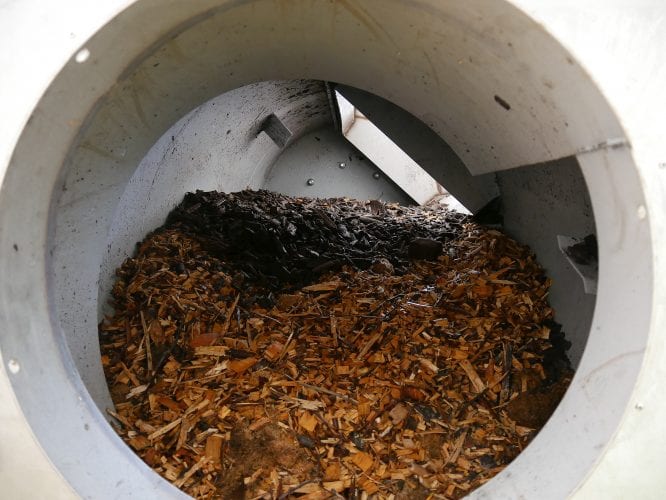 Petersburg Indian Association’s new composting machine is open on one end showing a batch of wood chips and fish meal being composted. (Photo by Angela Denning/KFSK)

“The temperature should get up to 160, 140 [degrees]. It’s pretty crazy to open up your pile and steams just rolling out of it,” Thynes said. “It’s pretty amazing.”

Before working for PIA, Thynes used to be a commercial fisherman. He knew there was a lot of fish waste. It gets ground up and dumped into the water in front of town by local processing plants. Now, Thynes gets some of that leftover fish for free. The tribe uses up to 500 pounds a week for composting.

“It’s a great year round business for the tribe, helping the environment by not pumping that fish waste into our Narrows,” Thynes said.

If there’s a shortage of fish Thynes says they could always use kelp.

The wood they get from scraps around town that would otherwise get burned at the landfill. It’s usually alder because it grows fast and people often want to cut it back. PIA puts it through a wood chipper and its ready for composting. But they won’t just use any scraps. They have to know where it’s from and that it hasn’t come in contact with pesticides or other chemicals.

“It’s not labeled organic but it is organic because we don’t add anything to it,” Thynes said. 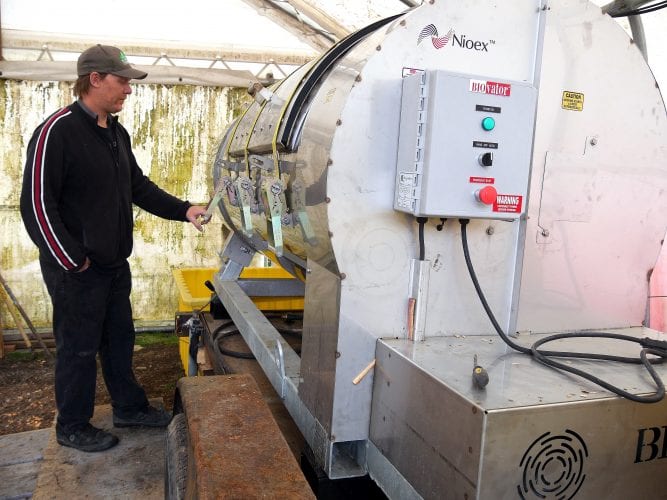 The composting machine is on a timer so it rotates every two hours. It takes about two weeks for the fish and wood to become dirt and then it needs to sit and cure for a month before it can be used.

After a batch is done, they’ll filter out any leftover pieces of wood to go into the next batch.

“It’s actually like a little starter, kind of like sour dough where the microbes are on these pieces already,” Thynes said. “So, it spreads throughout the compost a lot faster.”

PIA has been making compost for years. In the past, the tribe used an older model composting machine that kept breaking down. Then workers made compost by hand by what’s called static aerated piles. Wood chips and fish were layered in a heap on the ground, which would get aerated and turned occasionally. But the process was lengthy. And when Thynes started working for the tribe a year and a half ago, he wanted to expand. He says they were missing opportunities.

“Juneau wanted quite a bunch, like 50 cubic yards and we just couldn’t, I couldn’t make enough to get what they wanted,” Thynes said. “So, it was stuff like that, opportunities to make it a business, and hire some more tribe members so they can have a [full-time], year round job that pays well.” 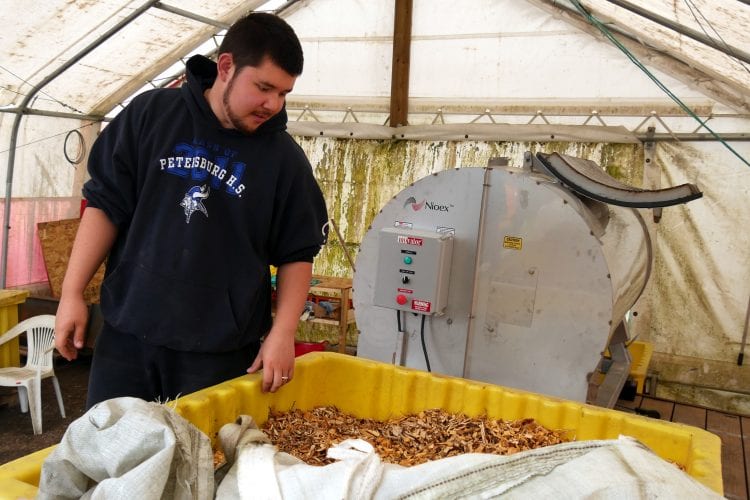 Clifton Gudgel, a worker with Petersburg Indian Association, stands near a bin of wood chips that will be used in the tribe’s new composting machine.(Photo by Angela Denning/KFSK)

Gudgel, Thynes’ assistant, says he likes having a job where he can work outside.

“Getting out there and getting the materials and throwing it all together,” Gudgel said, “and just doing something different rather than standing behind a desk or stocking things on shelves.”

Thynes keeps a detailed notebook of batch results, what goes in when and at what temperature. On average, this machine can produce about 40 pounds of compost a day.

PIA plans to sell it in 40 pound bags within a few months. It will cost about the same price as imported compost sells for at the store. But Thynes says this stuff will be pure, local product.

And when it’s done?

“It kind of looks just like dirt,” Thynes said, laughing.