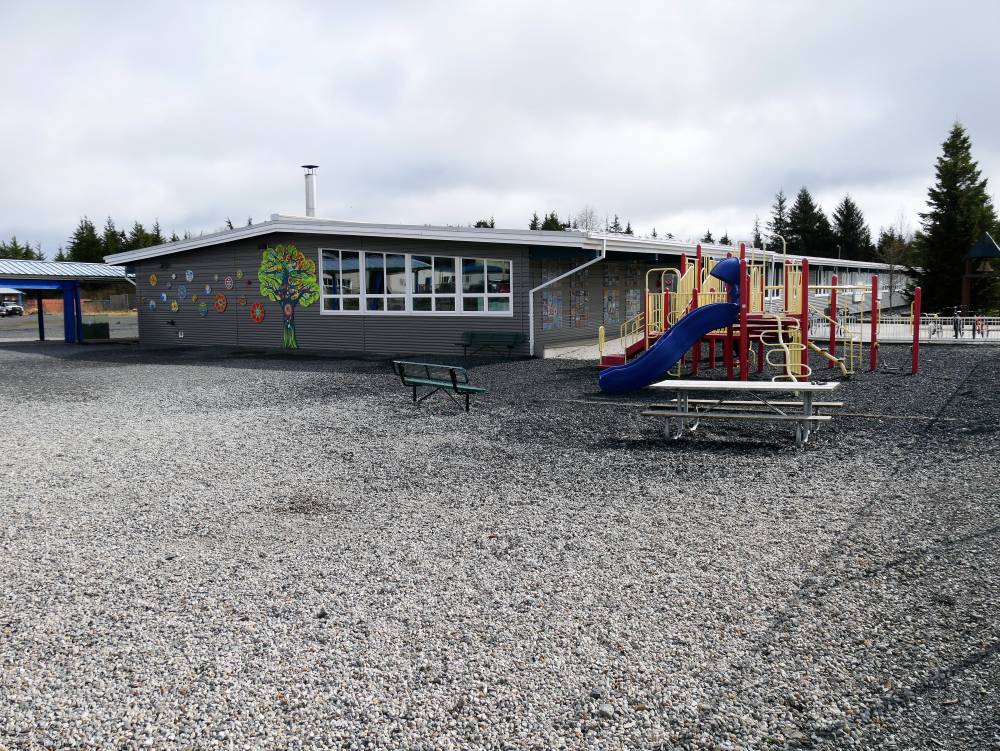 This playground equipment at Stedman Elementary School in Petersburg will be moved to the east side of the school this summer. In its place will be an outdoor classroom with trees and shrubs. (Photo by Angela Denning/KFSK)

More playground work will continue at Petersburg’s elementary school this summer. The school will consolidate playground equipment to one side of the building and make the other side a green space sitting area. KFSK’s Angela Denning reports:


A lot of upgrades happened last summer at the playground on the east side of Stedman Elementary School. The school added some new equipment and replaced others. They’re working to be more ADA compliant for students with disabilities.

About a year ago, the school created a playground committee with parents and they hired a playground architect to figure out how to make improvements.

“We’ve had a lot of brain storming sessions,” said Stedman Elementary Principal, Teri Toland. She says what they found out was there is no need to have two playgrounds, one on each side of the building.

“We always have kids out for recess in scheduled times where they can schedule extra recesses but there is plenty of room for students to play in one playground,” Toland said.

So, instead of improving two playgrounds they will be moving the equipment, consolidating it into one place. The play structure that’s near the office will move to the east side of the building underneath the covered area.

“It’ll be a place where students can still climb and play when it’s raining or when there’s lots of snow,” Toland said. “And so half of it will be the play structure but we’ll still have half of that covered area for playing ball, four square, basketball.” 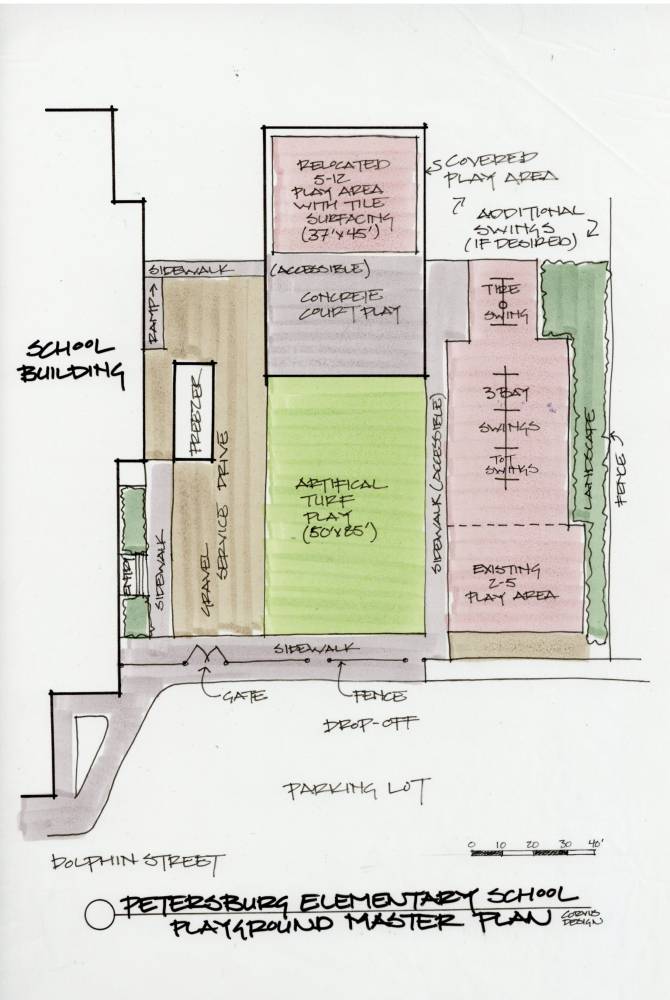 This image shows the playground plan for the east side of the Stedman Elementary School. (Image courtesy of Teri Toland)

On the east side, more artificial turf will be added on the ground. They plan to put in a tire swing to go with the new swing sets they installed last summer. They also want to get two skiffs partially buried that children can play in.

One of the goals of the new playground will be to encourage more imaginative play in a natural environment.

“We have lots of kids who enjoy making ferry houses, using twigs and sticks,” Toland said. “Even expanding, even some PVC pipe to make log houses and things like that.”

Toland says hiring a playground architect has been a real eye opener. They have learned a lot in the process. She says the playground shouldn’t be just outside the library, like it is now, because the library is a quiet place. Also, the outside of the school on the west side is mostly just an empty space covered in gravel and a metal fence. It’s rather cold and industrial looking. So, they are planning to make it more inviting with trees and bushes where people can come and sit. Community members on a landscaping committee helped choose the plants for the space.

“Our plans include eventually an outdoor classroom, paths that go through, a shelter that would have some gently swinging seats,” Toland said. “Our middle school uses that for recess still and it’s a great place for them to sit and talk and then there’s other places that they can run. So, it will accommodate our middle school as well. And even around front, we have a waiting patio, a place where kids can wait for school to start, they can park their bikes. That will have trees out front as well. It will really soften the look on this end and be a place where people can sit and enjoy our school. ” 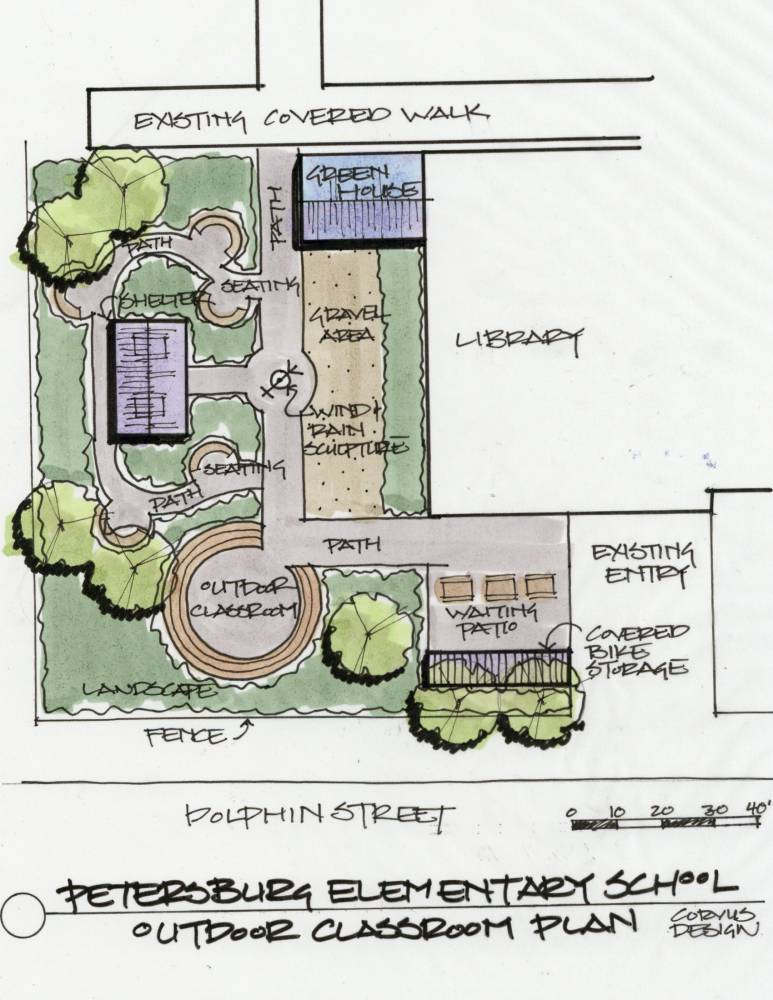 This image shows the plans for the west side of the Stedman Elementary School. (Image courtesy of Teri Toland)

Most of the work will be done by the school district’s maintenance staff. The rock and dirt work will be contracted out.

The project should be completed in the next two to three years.

There are also long term plans to add a stream of water in the natural playground area near the community garden and to build another green house near the school’s boiler exhaust area to use the excess heat that is released there.

Teri Toland encourages anyone with questions about the playground upgrades happening this summer to stop by the school and talk with her about it. They are also looking for donations, like PVC pipe, for the natural play area of the playground.